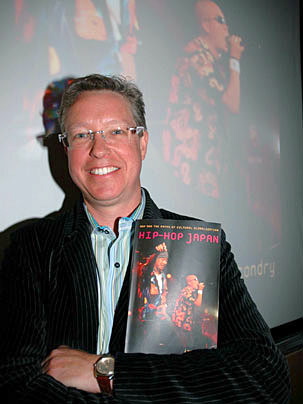 Tonight’s guest at Beat Research is my friend & colleague at MIT, Ian Condry, author of Hip-hop Japan (Duke U Press, 2006). He’ll be joining us this eve to celebrate the translation of his book into Japanese, and he’ll do so by offering a set that traces the broad contours of Japanese hip-hop.

I hope he’ll play a few tracks like Seeda’s “6 Milion Ways,” a song featured on a mixtape he made this summer, which pushes my hip-hop/reggae crossover buttons with its Sleng Teng bassline and Cutty Ranks chorus —

You can get a taste of Ian’s research on this page, which includes a brief history of hip-hop in Japan along with audio and video samples, but I highly recommend the book. Allow me to quote a few passages to give you a sense of Ian’s analysis, which seeks to get beyond the dichotomies (global/local, authentic/non) through which we tend to appraise such things as hip-hop outside the US —

In contrast to symbols of cultural globalization, such as Coca-Cola, Disney, Nike, and McDonald’s, which take their cues from huge multinational corporations, hip-hop in Japan draws attention to an improvisatory working out of a cultural movement in the language and among peer-groups of a particular generation of youth. (12) …

Borrowing from Cornel West (1990), I argue that Japanese rappers are engaged in a “new cultural politics of affiliation,” that draws inspiration from African American struggles while generating distinctive approaches to race and protest in Japan. Race forms a part of Japanese hip-hop, but it operates in the context of an identity politics different from that in the United States. When Japanese artists proclaim that they are yellow b-boys, they are not asserting a pan-Asian identity, but rather drawing attention to their specific location in a differently configured racial matrix. In this, they suggest the possibilities for a transnational cultural politics of race that improvises on their understanding of hip-hop’s core values. (20) …

West’s perspective emerges from a different context, but the lessons for a study of black culture in Japan are profound. In particular, the application of his ideas exposes the limitations of searching for the local or the Japanese in overseas hip-hop. Indeed, although I use the term black culture, we should bear in mind that the term is shorthand for a complex range of practices, ideas, and discourses, never meaning any one single thing. Similarly, highlighting the local features of hip-hop in Japan risks reproducing images of the Japanese people while underplaying the ways in which Japanese emcees are engaged in critiquing mainstream standards of what it means to be Japanese, among other artistic and political goals. … I would argue that many uses of hip-hop in Japan attempt to produce a kind of political affiliation, but that the politics must be situated in the spaces and contexts in which they are performed. This reorients our attention away from questions of whether the Japanese “get it” or “don’t get it” when it comes to race and hip-hop, and instead draws us toward questions of what Japanese hip-hoppers are doing with the music in their own worlds. (29)

BTW, I gotta report that we have a very exciting autumn at Beat Research. Check the allstar lineup!!!!!!

Oh man oh man oh man, r u as psyched as I am? Monday nights RULE this fall. See you 2nite mebbe?