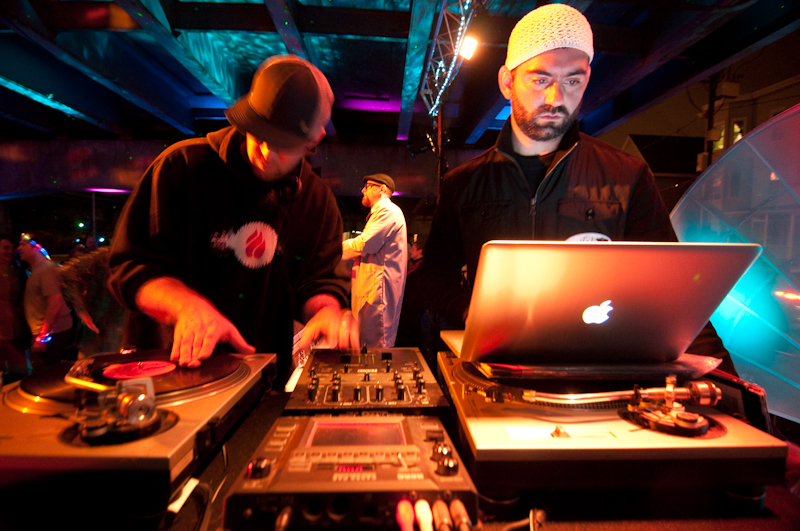 me & keith, mixing under mcgrath (photo by charles daniels)

It’s a special week in W&Wland! Not once, but TWICE, I’ll be playing alongside one of my favorite local turntable heroes: DJ Axel Foley. I’ve been jamming with Keith for years now, and it’s always great fun. He provided scratches for several tracks on Boston Jerk back in 2003, and he’s been a recurring guest in Electro Class, where he’s offered an incredible demo of the history of scratching, from the baby scratch to the crab. (Some of you may have seen him replay this routine for some visual-wizardry c/o Jesse Kriss. If not, you should.)

Tonight, Axel will be our guest at Beat Research; & Friday, I’ll be guesting at his weekly gig at Grafton Street in Harvard Square, where Keith gets to indulge his penchant for funky disco and boogie jamz galore. As it happens, I’ll already be in the Square on Friday for a symposium on the New Literary History of America edited by Greil Marcus & Werner Sollors, so I’m hoping I can turn the gig into something of an afterparty for some of the heavyhitters gathered at Hahvid this weekend. We’ll see; Keith and I will be dropping some heavy tracks at any rate.

For now, I’ll leave you with a fun clip of Axel, me, Pace, and VJ Dziga jamming under a highway in Somerville this summer —