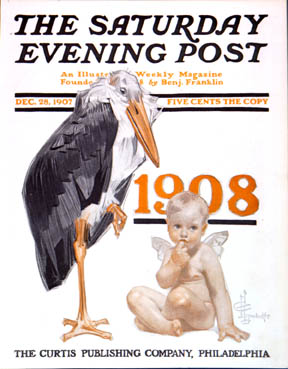 It seems natural that babies are such common symbols for the renewal and growth promised by a new year, but for Becca&me a baby is an especially appropriate symbol for the new year, since this year — indeed, this month! — will bring us an actual baby of our own.

I’ve been waiting to make a proper announcement here, in part out of prudence and in part out of privacy concerns (which I’m constantly trying to navigate in my online doings). I couldn’t possibly keep it a secret, though, nor would I want to. Grounding my perspectives in my own experience and personal life is pretty crucial to my voice as a blogger, a critic, an ethnomusicologist. It helps to give a sense of where I’m coming from. So, dear reader, you can expect plenty of baby-related blogging to come.

That said, I promise not to turn this blog into babygadget. There’s no doubt, however, that I’ll be reflecting on and sharing a lot of the discoveries that are sure to come with parenthood, especially musically related ones. Indeed, I’ll prolly be posting soon about my own plans, which I’ve been hatching for some time, to create quality playlists for an infant (this kid will have a dedicated iPod, no doubt), and I’ll be soliciting some advice on good music to accompany sleeping and crying and bouncing and imagining and such. (E.g., lullabies and ambient stuff and other soothing sounds, sure, but also nuff dub, mathy Mozart, and everything from gamelan to mbira to Webern — just to be sure that our daughter’s aesthetic sense doesn’t get too warped by “common practice” harmony.)

Toward that end, I recently ordered the 3 CD set, Soothing Sounds for Baby, by Raymond Scott. If you’re not familiar with the project, it’s a collection of electronic music pieces composed by Scott in conjunction with the Gesell Institute of Child Development in 1963. I’m not sure exactly how the sounds connect to the the institute’s research, but they’re pretty amazing. Unsurprisingly, they’ve been hailed by many as totally visionary, anticipating dub and techno and ambient (which is not really too far a stretch once you give a listen). Soothing? I’m not so sure. But interesting without a doubt, and for a young, developing brain, interesting is very good, I think.

You might be more familiar with Scott’s music than you think, especially since Carl Stalling drew heavily on his quirky swing-era compositions to animate plenty of Looney Tunes scenes. (Loony tunes indeed!) One composition of Scott’s that may jog your childhood memories is “Powerhouse,” which seemed to propel any scene involving factories or the insides of brains or biceps (which were often portrayed as factories). I’m a big fan of the version Don Byron recorded for his Bug Music project (see, esp, the part that begins around 1:14 or so).
[audio:http://wayneandwax.com/wp/audio/byron_powerhouse.mp3]

As an opening gesture toward creatively sharing our new world with you, I’ve attempted to mix’n’mash an ultrasound recording of our little one’s heartbeat. When I first visited our midwife with Becca and heard these sounds, I was totally blown away — not only by the profundity of a little heart beating in my wife’s belly but because they sounded really cool, both timbrally and rhythmically. The timbres are great — low-fi doppler effects reminding me of glitchy techno — and the rhythms are pretty awesome in their own right, usually a chugging beat between 130-140 bpm, and often, oddly enough, doing something of a shuffle! I guess the rhythms are a complex product of lots of signals being picked up — not just the baby’s heartbeat, but also, apparently, the pulse of blood through the placenta.

The next time I returned, I brought my minidisc with me. I didn’t get a very clean recording, but it is what it is. You can hear Becca and Gretchen talking a little bit, and you can hear me at the very end.
[audio:http://wayneandwax.com/wp/audio/nico-heartbeat.mp3]

I’m no wizard when it comes to EQ, so I have to admit that I’m not terribly satisfied with how my remix has come out. I tweaked and tweaked and tweaked things until they sounded ok. I decided to cut several loops from the recording, wherever cool little rhythmic cells suggested themselves. I then augmented these rhythms with bass kicks, hand claps, and Boston bouncy hi-hats. Overall, the feel is largely electro-ish, until the end when I let the shuffle do its thing swing. Because I felt like it was still lacking in the area of melody, I decided to add the melodic march of Scott’s “Tempo Block” (from Soothing Sounds), though I’ve warped it to about 30 bpm faster than the original and pitched it down several semitones; I’ve also done a little cutting’n’pasting to make it fit the form I had worked out with the heartbeat recording.

I can’t wait for Philip Sherburne to hail the arrival of “uterine house” ;)

And, yes, as implied above, we’ve decided to name her Nico, which is one of the only names we’ve really liked, and which would have been the name for our little boy had the genes gone that way. We like that it’s a gender neutral name, and that it’s a name in lots of places around the world. We also like that it’s not too popular a name. (A lot of our other potential picks turned out to be far zeitgeistier than we expected.) It’s not inspired by any particular Nico. Mostly, we just like how it sounds.

A happy new year to all. Wish us luck with the little big bump in our lives!

We’ll let you know when she arrives.