Last night at Beat Research the employees of Cambridge-based video game makers Harmonix swarmed the E Room with their friends, their gadgets, and their various musical side projects. They put on quite a show, and to a packed house! Video killed the radio star, but Rock Band might make some rock stars yet. 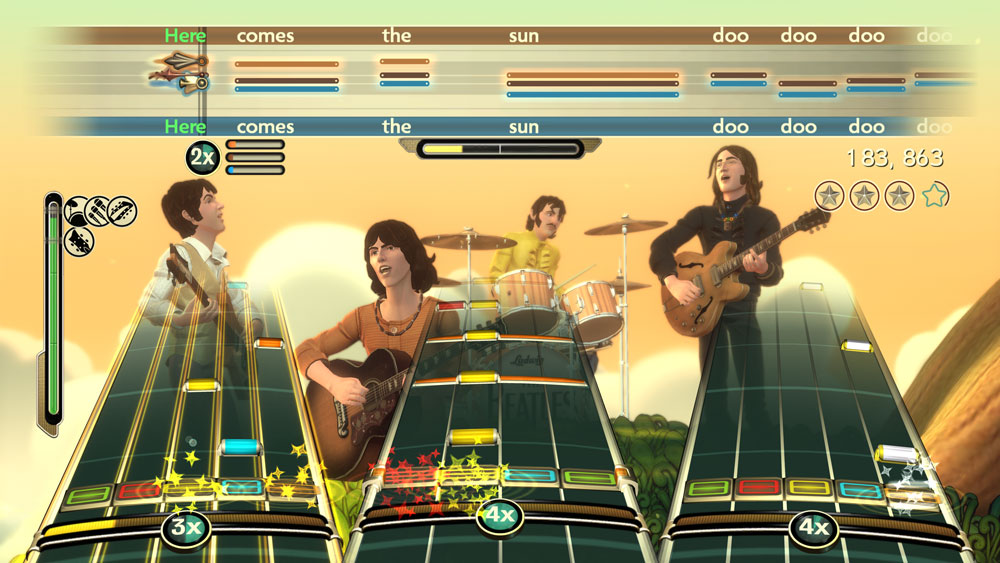 Harmonix is in the news right now as they gear up to release the newest edition of Rock Band. Devoted to the Beatles, the game has been generating a lot anticipation and a lot of commentary. The Fab Four — by which I mean Paul, Ringo, Yoko, and Apple Corp. — are remarkably and, in some cases, notoriously strict controllers of their music and brand. Case in point: their recordings are still unavailable via iTunes. So the fact that they signed on with Harmonix speaks significantly to their belief in the potential of the game — and, it goes without saying, their ability to maintain close control.

This emerges, alongside countless other fascinating bits, in a recent NYT magazine article, in which Harmonix founder and CEO Alex Rigopulos claims no less than to be on the brink — and at the helm — of a new era in THE music industry:

… last month Harmonix announced that it will license software tools and provide training for anyone to create and distribute interactive versions of their own songs on a new Rock Band Network, which will drastically expand the amount and variety of interactive music available. Already the Sub Pop label, which released the first Nirvana album, has said it plans to put parts of its catalog and future releases into game format. The Rock Band Network is so potentially consequential that Harmonix went to great lengths to keep its development secret, including giving it the unofficial in-house code name Rock Band: Nickelback, on the theory that the name of the quintessentially generic modern rock group would be enough to deflect all curiosity. After a polite gesture in the direction of modesty, Rigopulos predicted, “We’re really going to explode this thing to be the new music industry.”

The possibility of opening up the Rock Band platform for all manner of artists and labels (not that they’re offering to do that exactly) is definitely an exciting one, and the release of the Beatles game will no doubt prove a major marketshare expansion for Harmonix. What struck me throughout the article, however, was not so much the implications for (the?) music industry, but rather, the bizarre contradictions that emerged around questions of control (of the Beatles’ “property”) and, simultaneously, an acknowledgment that the Beatles are inherently (and increasingly) a fan-produced phenomenon.

Paul seemed to voice this recognition most clearly when he says that a Beatles edition of Rock Band “reflects where the Beatles are at,” since, as he puts it —

We are halfway between reality and mythology.

I suppose I’d agree with that (and/or this). But this recognition of the Beatles’ mythologization seems pretty ironic alongside the band’s cautious and occasionally litigious actions with regard to “unauthorized” uses of their music. The article describes the deep degrees of tricknological secrecy and protectiveness applied to the project c/o Giles Martin, the audio engineer son of fifth-Beatle and legendary producer George Martin and Harmonix’s point of contact with the Beatles’ master recordings.

Mainly Martin worked in the less-iconic Room 52 down the hall, next to the men’s room. Apple’s preoccupation with security meant that the high-quality audio “stems” he created never left Abbey Road. If the separated parts leaked out, every amateur D.J. would start lacing mixes with unauthorized Beatles samples. Instead, Martin created low-fidelity copies imprinted with static for the Harmonix team to take back to the States — in their carry-on luggage. They were just good enough to work with until the game coding could be brought back to Abbey Road and attached to the actual songs.

I found the references to “amateur D.J.”s and “unauthorized samples” — even though it’s unclear whether these are Martin’s or the author’s words — pretty interesting to read against McCartney’s quote above. In other words, THX 4 THE MYTHOLOGY BUT DONT DO ANYTHING UNAUTHORIZED K? Or, you’re welcome to re-meet the Beatles, but don’t try to re-mix them.

One wonders what would be the harm of “amateur” DJs “lacing” mixes (now there’s a verb) with “unauthorized” Beatles samples. I mean, as “amateur” products such mixes would not circulate in the same market at the Beatles, or any market for that matter. Moreover, however craptastic their new contextualizations, they could never lessen the power of the original songs. And what harm would fantastic remixes be? Could such critically-acclaimed and popularly shared projects as the cease-and-desisted (but only kinda) Grey Album, or DJ BC’s The Beastles, actually degrade or dilute the Beatles brand? Detract from their mythology?

How is one supposed to participate in the Beatles’ mythology anyway — a mythology which, like all myth, can only be collectively produced and maintained — if one needs “authorization”? This paradox brings us to one of the oddest, and perhaps most disturbing and incoherent, quotations in the piece:

McCartney sees the game as “a natural, modern extension” of what the Beatles did in the ’60s, only now people can feel as if “they possess or own the song, that they’ve been in it.”

Only now? You mean that when I bought those CDs and sang-along with friends and family and learned to play your songs on guitar and tried my hand at remixing a few tracks … you mean that all that time I’ve yet to inhabit or possess your songs. Shucks. I guess I’ll have to get the game.

This is all a little maddening for those of us who insist on our rights to work with and riff on public culture — especially public culture we hold dear. (And I do hold the Beatles’ oeuvre quite dear, in case you didn’t know.) Few things could be more public than the Beatles’ repertory, which, to paraphrase John, might be more popular than Bible hymns. In the face of all of this, I have to stand by a bit of insight I came by some years ago: if Michael Jackson can own the Beatles’ music, so can I.

McCartney is either disingenuously hyping this product with a quote like that or, I just don’t know — maybe the author distorted the sentiment somehow. I can’t swallow that Paul actually believes playing Beatles Rock Band is truly the first or only way to “possess” or “own” or “be in” his & his bandmates’ songs. I think we either do all of these things anytime we engage seriously with a song, in the many ways that may happen (listening, singing, playing, tweaking), or we never do, even those of us who write songs.

Musician and writer Ethan Hein, who himself recently posted about Rock Band and inhabiting songs, also seemed a little irked by McCartney’s comment. His retort? “You know what really makes me feel like I possess a song? If you let me remix it.” The last few words of that sentence link to a meditation on sampling which includes a pretty resonant paragraph with regard to the ownership of songs; allow me to quote Ethan at a little length —

When I was an angry, confused teenager, I let myself be convinced that ideas are property, that it’s possible to steal them and thereby harm their owner. I listened to strongly opinionated musicians and critics hold up originality as the main criterion of artistic worth. Then I got out into the world and did a lot of playing and interpreting and composing of my own, and at the end of the day I’ve come to feel that to assert ownership of a song is like trying to assert ownership over a person or an animal or a place. You can have a close relationship with a song, you can be present at its birth and you can give it nurture, but once it grows up, you can’t control it. Why would you want to?

Say word. At that, I’ll leave you with perhaps my favorite Beatles mashup. Good luck removing this from the world! Or figuring out who “owns” it —

Oh, and props to Harmonix and the Beatles. I bet the game is gonna be great. SRSLY!

20 thoughts on “Re-Meet the Beatles, *Really* This Time”