Boston will be bouncing tonight — 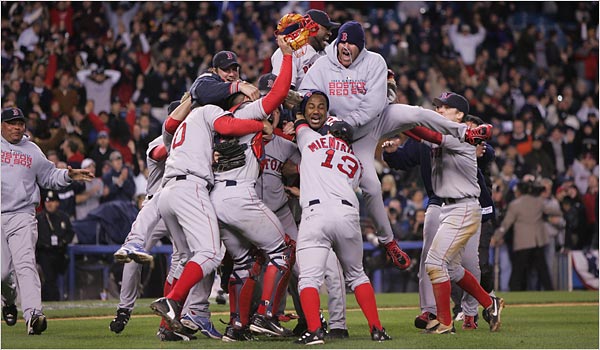 & not just b/c the Sox have convincingly emerged from the 20th century “Curse of the Bambino” triumphant and dominant, but also b/c we’re gonna be gettin down at BR with two of Boston’s best DJs: virtuoso rekkid blenda, dj rndm, and Boston Bounce originator and Beat Research founder, DJ C !!

Tony Flack and I have brought DJ C back to town to engage in some actual classroom-based Beat Research. He’s gonna be visiting Tony’s “Beat Research” class at MassArt this week, as well as my “Digital Pop: From Hip-hop to Mashup” class at Brandeis University on Tuesday and my Electro-Class at Harvard Extension School on Wednesday. My classes are both going to be turning to dubstep this week, listening to it in the context of the post-hardcore / jungle / d’n’b / garage / grime genealogy (what some would call the nuum). Dj C’s been riding this wave of breakbeat-infused/inspired and dubwise music for well over a decade, and so I can’t think of many people who would be better to talk about — and demonstrate! — some of the distinctive musical features of these genres.

Since both of my classes have an important hands-on dimension (producing tracks in the genres that we’re studying in historical and cultural context), I asked Jake if he might shed some light on how to craft those distinctive “wubbity wubbity” bass lines that have so powerfully propelled some of the biggest dubstep tunes in the last few years. Well, C — aka Jake, aka Mr.Mashit — has outdone himself, preparing (and posting!) an informative tutorial, “Bass Research,” on the Mashit blog.

That’s an extraordinarily generous gesture on his part, and I want to take the opportunity not only to thank him publicly and point readers that-a-way but to call for other producers out there to share their own tips and tricks in similar ways. (E.g., I’ve done a little of this, but not very recently; YouTube is full of how-to videos; sites like this offer a wealth of info; etc.).

I’ve had some trouble in the past convincing collaborators to share their knowledge in this way. That knowledge, some would say, constitutes a serious competitive advantage. But I’ve been showing students everything I know for years without thinking twice about it. The fact is, at bottom, that no two people are gonna make the same music, regardless of what techniques or tools they have in common. People who are too shook to trade secrets clearly lack confidence in their own ability to craft original beats. That’s silly. We all have unique musical backgrounds and affinities and imaginations to draw on, and the tools or techniques we use will only determine the sound to a certain extent. So, I’m sayin: share, share alike!

The advent of digital technologies for producing and circulating music, ideas, and software has created profound new possibilities for real music industry to take the place of a corrupt, teetering music industry (i.e., the kind of hogs who stifle the oinks of the world). Let’s network, y’all.

As I wrote three years ago,

the curse has been our collective albatross, an ontological imperative to live in dread.

& I have to say that, in the wake of this season’s march to the championship, that dread is completely, utterly gone. Watching the Red Sox at this point is practically (ok, not quite) like watching the Patriots. Srsly, it’s quite amazing how different it feels to be a Sox fan, not to mention to witness the NYT claim that the Red Sox are the new Yankees.

I really don’t want that to happen, though. I don’t want the feeling of overcoming a curse and clawing our way to winning to be replaced by guilt about payrolls and ambivalence about the club’s character. And like the fans quoted here, I sure don’t want A-Rod on our team —

In Denver, as the Red Sox celebrated their fresh World Series title on the field, a few hundred fans stood behind the third-base dugout and gave them some off-season advice. They shouted, â€œDonâ€™t sign A-Rod.â€ Earlier, the fans had chanted the R-rated version of â€œA-Rod stinks.â€ Mike Lowell, Bostonâ€™s third baseman, can become a free agent, too, so the fans also chanted, “Give Lowell the money.”

But enough stinkin thinkin for now; now is the time for ebullience. In other words,