As can be imagined, I give a lot of thought to the soundscapes my two daughters soak in, especially when so much of it is structured by me — at home, in the car, or anywhere else I can plug my iPod/Phone, whistle a tune, or bang out a rhythm.

When I’m selecting a kind of background music, something to inject a little colorful noise into our home, I tend to draw on particular playlists I’ve put together. These are labeled, for better or worse (I know there are categorical / ontological problems with these, but let’s set those aside for now):

I also draw heavily on folders labeled things like jamaican-jazz, electronic-fun, ambient-music, technos, all-gamelan, and so forth. Mostly instrumentals, or some foriegn language vocals; very little, if any, English language. (I tend to find English vox distracting, hence not as easily “ambient” as I want.)

As I mentioned way back when, I’m concerned with exposing my children to as wide a range of musical forms and aesthetics and tonalities and ontologies (what is music?) as possible. And I do feel some need to foreground non-Western music given how inevitably “Western” so much of what they hear elsewhere tends to be. I’m not joking when I say that I don’t want their hearing to be “ruined” by too much (Western) tonality. And so I’m careful to balance Mozart with mbira, Bach with Bali; indeed, never mind balance, I’m hoping to submerge the so-called “common practice” “canon” in the vast oceans of the music of the world.

What has been interesting, however, is the discovery that I actually find myself gravitating frequently toward baby-music-tonal, which may take liberties in its interpretation of “tonal” (putting Riley and Reich and Rachel’s alongside Bach and Chopin) but remains fairly anchored in what we might (as well) call “Western tonality.”

I think it has a lot to do with the mellowness of solo piano stuff (won’t wake the kids!), though I have to admit that — as much as I seek to counter the influence of Western art music and think Mozart-for-Babies is a bunch of bullshit — I am also a believer in the potential effects of (slowly, somewhat subconsciously) comprehending the often wonderfully symmetrical (and asymmetrical) forms so powerfully modeled by something like Bach’s fugues (or his Goldberg Variations, which, in the form of Glenn Gould’s landmark 1955 recording, kicks-off the playlist). I am persuaded — or inclined to believe — that hearing and listening to such forms and retracing them in one’s mind might help to build all kinds of conceptual bridges. Good grist for the mind’s mill. Can’t hurt anyway, I don’t think — at least not in the healthy company of all kinds of other forms.

Given this apparent predilection — as well as my boom-bap leanings — I was delighted to hear that Mad EP, a fine cellist and beatsmith (and hence a fan of Bach & Shostakovich as well as Dilla & FlyLo), not to mention a devoted dad, recently put together 24 Breakbeats, one for every major & minor key. Stream or download here; & share it with the kids (of all ages) — 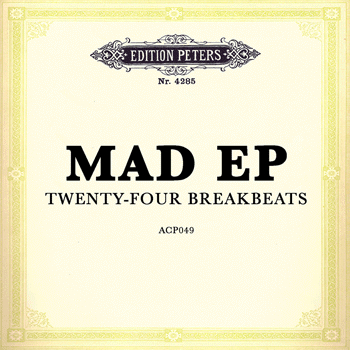 I definitely want to share some of my favorite baby/kid music here in the near future. There are some truly striking and beautiful songs in those playlists, most of which go well beyond the typical w&w fare. (I also listen to “acoustic” music! SRSLY) Perhaps a mix of some sort is in order. It’d be the sort of thing, like Ripley’s recent & radical contribution to the repertory, that would hardly scream “kids” and might, I would hope, work in a variety of settings and for young & old alike.

Also: still very much open to recommendations! The last round bore some sweet fruit.