Some bookish things to report, including the latest re: Reggaeton — namely, that tomorrow, Wednesday May 27 (which happens to be my born day), I’ll be appearing alongside co-editor Raquel Rivera on WNYC’s Soundcheck.

The show airs live at 2pm EST. I believe it’s carried by a number of NPR stations nationally, or can be listened to online. If you’d like to hear something like the /Rupture radio show but a little more NPR-ish this is your best bet.

[Late update: I couldn’t make the trek to NYC today after all, so it’s just gonna be my capable compañera-de-libro, Raquel. Check (and comment on) the segment here.] 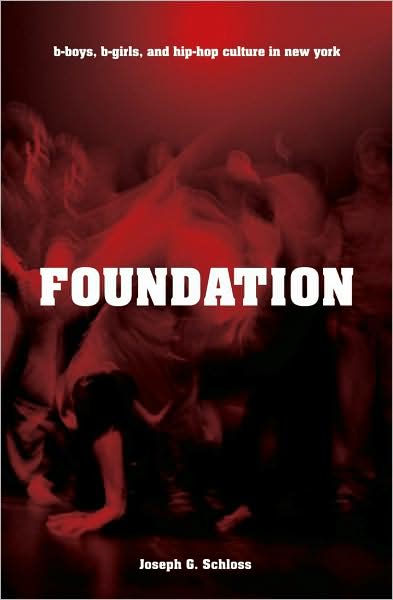 1) Joe Schloss’s Foundation is an ethnography and history of b-boy culture just out on Oxford University Press. Joe is a good friend, a fellow hip-hop ethnomusicologist, and one of the most lucid and sensible thinkers about hip-hop I know. Check the technique from a recent review by Adam Mansbach —

Both the coherence of b-boy culture and its under-the-radar status, Schloss argues, can be attributed to the form’s relative lack of commodification. Graffiti exploded onto the gallery scene in the early ’80s; rap records were selling millions of copies by 1979. B-boying proved more difficult to package. It was a process, not a product, so it escaped back underground, relatively unscathed.

The unmediated nature of b-boying also accounts for the dearth of scholarship on the subject. According to Schloss, writers are accustomed to analyzing the artifacts hip-hop offers the market; lamentably, this “puts the theory in the hands of the scholar” and “relieves [him] of the obligation to actually engage with the community.”

Schloss’s approach is quite different, and the result is the best work ever produced on b-boying, and one of the finest books yet to emerge from the swiftly proliferating ranks of hip-hop scholarship. In researching “Foundation,” the author spent five years attending every b-boy event in New York City; not only did he interview the craft’s leading practitioners, he apprenticed himself to them, learning the dance physically, intellectually, and spiritually.

Once a cornerstone of all hip-hop expression, the mentor-apprentice relationship is another victim of the culture’s marriage to mass media. Many graffiti writers, for example, claim that the biggest change their art form ever underwent occurred when professional photographers began documenting it; this allowed neophytes to learn style from photos instead of masters.

But in b-boying, apprenticeship is alive and well. “The vast majority of serious b-boys and b-girls in New York,” Schloss tells us, “have studied directly with the elders,” pioneers who have been “refining their aesthetic for upwards of three decades . . . and are barely even in their 40s.” 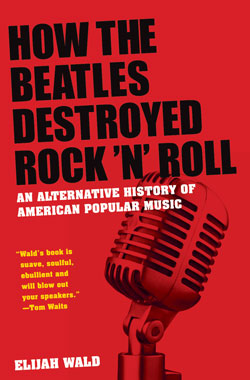 2) Elijah Wald, a true pop-musical polymath, has a new book out (also on Oxford U, as it happens), bearing the provocative title, How the Beatles Destroyed Rock ‘n’ Roll: An Alternative History of American Popular Music. Elijah, who is also a friend and who I’ve had the pleasure of chatting with at several music conferences (much to my edification), offers up a meticulously researched, funny, and sometimes surprising account of the history of US pop from the late 19th into the late 20th century, taking apart a number of myths and filling large lacunae while proposing a rather grand narrative of his own.

Here’s how he describes the work, and his rockist/poptimist motivation to write it, in an email I received today —

it began to bother me that virtually all pop music history has been written by roots, jazz and rock fans–people like me–who tend to take pride in our unique tastes and despise mainstream pop. And we tend to write the history of what we like rather than the history of what happened. So this is an attempt to give a clearer picture of how pop music evolved, looking at changing dance styles, technologies, and the lives of working musicians and regular listeners from the dawn of ragtime to the dawn of disco–with some fun stories to back it all up.

You can read more about it on Elijah’s site, while streaming some John Philip Sousa or, if you’d prefer, an hour of Top 40 radio from Scottsdale Arizona in the summer of 1964.

Elijah’s email also included some simple, sensible tips for those of you who are interested in supporting authors and booksellers in these strange days. I’ll leave you with these thoughts then, and the mild suggestion that you might consider doing the same for our querido librocito —

Since book publishing seems to be getting shakier by the year, I
wanted to include a few ideas about what one can do to help out any book
or author one likes.

1. Spread the word–as the “mainstream” media are replaced by infinite
capillary streams, more and more of us are relying on the reports of
friends and acquaintances.

2. Call up your local library and ask them to order a copy. Libraries,
even in these days of tightened budgets, respond to readers’ requests.

3. As a dedicated browser, I always recommend that you buy from your
local bookstore (hoping that you have one), and if your local bookstore
doesn’t have the book, you can suggest that they carry it.

4. Wherever you buy the book (or take it out of the library, or
whatever), if you like it, take a moment and post a review on Amazon
and/or other online sites. Crazy as it sounds, positive reader reviews
really make a difference.

3 thoughts on “B-Boy = Book Boy, and Other Uprock Narratives”