Well, allow me to note it again and to send more love her way, especially as today marks the second annum since we publicly delared ourselves untwistably twisted.

If I may go further, I’d like to reprise once again a lil bit of wedding remixery I put together for that sweet autumn occasion two years ago.
[audio:http://wayneandwax.com/wedding/ww-pachelbels-cannon.mp3] 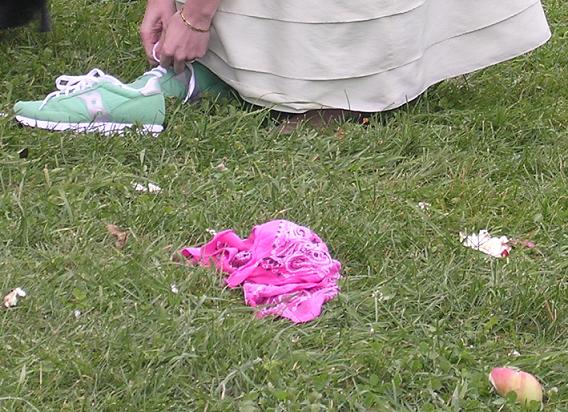 One more thing I’d like to share here is a special little something for my one and only (though others might enjoy it too — I stress the might, tho). It’s a faux-radio program I made for Bec some five years ago, long before we danced a hopped-up hora around an apple orchard. Recorded at yet another time when we were workin’ an Eastcoast-Midwest relationship, the show was a way of transmitting my voice to her — and something of an “intimate” version of my voice at that (and I stress the something of). I did the show in my “jazz voice” (honed at ‘HRB). In classic/cliche style, it’s low and slow, dry (but not wry as I’d like), easy on the intonation and high on the infomation.

The show was also a way of clearing up a small bit of confusion on Becca’s part — and giving her a lil ribbing. You see, a few weeks prior to the making, while playing a silly game of Trivial Pursuit® together, Becca had betrayed her shocking ignorance about which instrument Miles Davis played. And being, as they say, something of a jazz “buff” at the time, I knew I had to clear that up.

So the program’s called Miles Davis Plays the Trumpet. And it’s pretty textbook stuff really, your avg canonical chronology kind of thing (if featuring uniformly great performances — perhaps with the exception of that 80s era Cyndi Lauper cover I threw on at the end, but you gotta understand that stage of Miles’s career to get a fuller sense of his almost always adventurous ouvre.)

For the record, at this point in time I cringe a little as I hear myself affirm the same-ol’ simple sort of narrative arc which, after reading things like Scott Deveaux’s “Constructing the Jazz Tradition” (1991), I’ve grown more wary about uncritically reproducing. At any rate, this was a set, let’s not forget, put together for someone who wasn’t sure if Miles Davis played the trumpet. So I figured it’d be best to stick to basics. That said, I do throw some curveballs. I mean, you didn’t expect me to play “So What,” didja? And as I said, it’s almost uniformly excellent stuff, save for that DJ dude who keeps interrupting to tell you about who’s playing bass and which phase of jazz Miles is ushering in next.

Consider that a good grain of salt, all you non-Beccas out there. Again, this is more for her than for y’all, esp since she hasn’t heard it in about five years. I think the process went like this: shortly after I send it to her, Becca’s dad “steals” the CD out of her car and it quickly enters the vortex that was Charlie’s CD-collection-in-the-kichen. Four or so years later, I find the CD sitting in a box waiting to go out to the curb. I snatch it up and save it for just the right occasion. And today’s as good an occasion as any, since, alas, we can’t celebrate in person what with that whole commuter-marriage thing we’re trying at the moment. (Worry not though, drear reader, she’ll be here in Chicago tomorrow.) When Bec told me yesterday that she enjoyed listening to some of my mixes via those snappy lil players, in partic when my voice comes in at the end of the “New Science Experience” show, I figured a little revisited “radio,” despite the by-the-book narration, might be just the thing.

Yes, my dear, for thee I sing! wax monotonous.