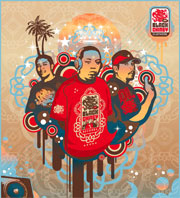 Jose Davila recently penned a profile of Black Chiney for the Miami New Times. In the article, I make a brief appearance, referring cryptically to a “triple threat” that never gets enumerated. Here’s the full transcript of my email Q&A with Jose, just for the record —

1: what do you like about black chiney/what makes them a great soundsystem/riddim production unit?

They’ve distinguished themselves in a crowded field by being a triple threat: hot mixtape makers, a sound system to be reckoned with in a clash, and a production house that has definitely cooked up some distinctive dancehall riddims in the last few years — and riddims which supported some “big tunes” in Jamaica, at that, which is no small accomplishment for a group living off the island, whether or not they’re Jamaican. Being based in Miami, however, also gives Black Chiney something of an advantage since the city is such a rich musical city, so plugged into the international music industry, and so close to and connected with Jamaica and the Caribbean. They’ve clearly got a good sense of what will play in dancehalls and clubs from Miami to Kingston to New York to London, and their riddims consistently engage with the contemporary sound of dancehall, but often with a unique twist of some sort. They’re also notable for consistently recording hip-hop artists on their riddims and looking a little more far afield in who they seek out for voicings (e.g., Kardinal Offishall, Akon, Nina Sky, David Banner), though their core collaborators are the top names in dancehall, which helps them to release their recordings through big, well-distributed reggae labels such as VP.

2:They are in part famous for the Kopa riddim, that riddim broke into the world of hip-hop(with nina sky) and the riddim was used by other hip-hop artists (such as david banner), do you see a trend of riddims breaking out of the dancehall scene and into hip hop?

Hip-hop artists will no doubt continue to record over the hottest dancehall riddims, and the mixtape circuit shows that hip-hop has long embraced the idea of reusing well-known backing tracks for new performances — which is the essence of reggae’s “riddim method.” But I’d actually say that the practice of recording over dancehall riddims for stateside releases has subsided a bit recently. The Kopa riddim is one of the last examples I can think of, and it came on the heels of other hits by hip-hop or R&B artists propelled by popular dancehall riddims, such as Lumidee’s “Uh Oh” (on Lenky’s Diwali riddim), or Pitbull’s “Culo” and Nina Sky’s “Move Your Body” (both over Scatta’s Coolie Dance riddim). Still, there’s no reason that dancehall producers shouldn’t be getting more calls from hip-hop artists given the overlap between dancehall style and club music today.

3:Their new riddim is called the “drumline” can you describe it, along with a short description of their kopa riddim? (those riddims have a heavy miami bass influnces, would you agree with that?)

The Drumline riddim employs the well-worn sounds of a marching band drum corps. That sort of style, often practiced and prized at Historically Black Colleges and Universities, is really resonant in the South, popularized through football and college and band culture more generally (as depicted in the film that shares the riddim’s name).

The Kopa riddim is an uptempo, percussion-driven track that nods to the Coolie Dance (and various riddims that followed Scatta’s lead) with its hand claps steadily marking each beat while synth drums and punchy bass give it a more polyrhythmic, reggae feel. They add some soaring synths and other effects to fill out the track’s texture, provide form, and give the vocalists melodic materials to work with. The occasional shouts (“hey, hey”) give the song a real party vibe and help to keep the energy high.

I can’t say that I hear much Miami bass in their sound, as the rhythms and timbres are much closer to dancehall than bass — more Korg Triton than Roland 808, more bomp-bomp than boom-boom. But I would still describe Black Chiney as having a very Miami sound based on their incorporation of samples associated with Southern, African-American music, their focus on percussion more generally, as well as the fact that the sounds of Jamaica have been the sounds of Miami for a long time — indeed, according to Luther Campbell, reggae records were often played alongside hip-hop records at early bass parties in the 80s.