Ok, Boston Massive, the time has come! Tonight we kick off our new monthly edition of Beat Research with none other than NYC’s DJ Rekha! 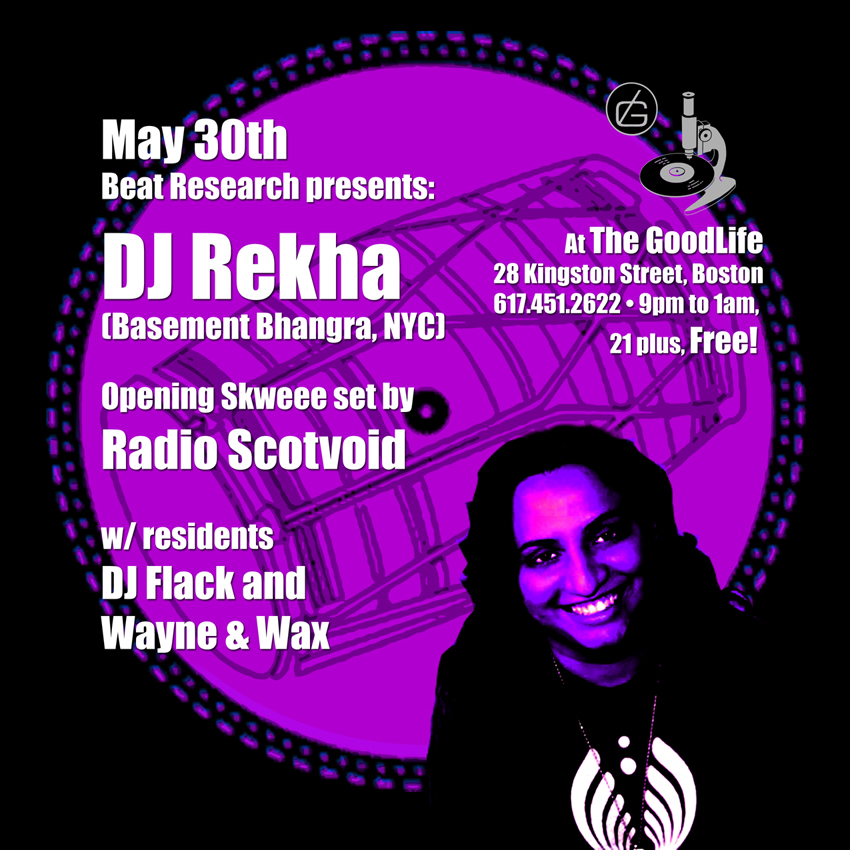 What (more) can we say? Flack & I have been wanting to get Rekha up here for ages; we’ve both had the pleasure to open for her at local shows; and we both love playing a bhangra track or three in our sets. I’m not sure anyone else in the house tonight will be quite as excited as we are, and that’s how it should be.

A lot of people, myself included, throw the term “ambassador” around when talking about Rekha, and that’s because it’s an entirely fitting description. Rekha’s been along for the ride — and piloting her own course — since just about the beginning of bhangra’s urbanization and transnational spread. For 15 years she’s helmed Basement Bhangra, and she facilitated the stateside premieres of no less than Panjabi MC, Tigerstyle, and MIA in the US. More recently she’s been collaborating with Zuzuka Poderosa, the NYC-based carioca vocalist. Yup, Rekha knows what’s up.

Moreover, though it should go without saying, Rekha’s Bhangra & Beyond approach — and, especially, how bhangra itself constantly opens into and refigures what lies beyond its borders — makes her a quintessential Beat Research guest. Even were she to play a set entirely comprising bhangra, you’d also hear plenty of dancehall, hip-hop, house, garage, and any other groove worth grafting onto bhangra’s big, sticky tree. It’s remix music par excellence, as likely to please conservatives and/or progressives as make them bristle. Here’s how she put it on NPR last year —

…theres a lot of debate around certain aspects of bhangra. Bhangra, if one would technically break it down, it is a male folk dance. It is a very specific rhythm, actually. So what is considered bhangra today is one of many rhythms, not exactly the bhangra rhythm. But as language evolves, culture moves forward, things start to mean other things. So bhangra has become sort of a ubiquitous term to describe a certain style of music and it’s definitely a battleground for tradition versus modernity.

And yet, despite contemporary, urban bhangra being about as “nu whirled” as it gets, I also think there’s something conspicuous about it’s general exclusion from the global / tropical bass repertory. Sure, there are echoes and flirtations here and there (especially if enabled by the likes of Timbaland), and some blogs have been consistently committed to staying up on the latest desi bangers, but for the most part, I’m pretty sure there’s a classic bit of brown-isn’t-black-or-white, ahem, coloring the reception and circulation of bhangra. And I’m pretty sure das racist.

Anyway, I was hoping to feature a little interview with Rekha here about that sort of thing, but she’s been too consumed by travel (to Bolivia last week w Zuzuka Poderosa!), so we’ll just have to chat about it later tonight. Looking forward to her perspective on it, but not as much as her set!

Indeed, you might consider getting there early, if you’re up for it, as we’ve got quite an amazing warm-up act in Scotland-born but Salem’s own — that is, Salem the town in Massachusetts — world-class skweee devoteee, Radio Scotvoid.

Scotvoid is the resident DJ of the Boston 8bit collective & hosts The Curios Show online, spinning a mix of skweee, 8bit & bass music. He recently released a couple tracks on French record label Tiburoni Records. Check this promo mixxx he did for the release:

The main thing you should know for tonight is that Scotvoid is serious about skweee, the semi-obscure but thoroughly awesome and remarkably sinuous synth music based outta Sweden and Finland. Given that its a recent phenomenon, you may be surprised — but then again, not if you’re familiar with the analog-love at the heart of skweee — to hear that a lot of skweee labels issue their music on 7″ vinyl. And Scotvoid is the type of guy (the only guy?) who can put together an hour-long skweee set entirely from 45s. Which is what he’s gonna do. Which is bonkers.

We’ll get things started around 9pm, so come make a night of it with us. Wiggle your mind, baffle your behind.

And since I can’t resist sharing, allow me to tease the incredible summer of Beat Research we’ve lined up: 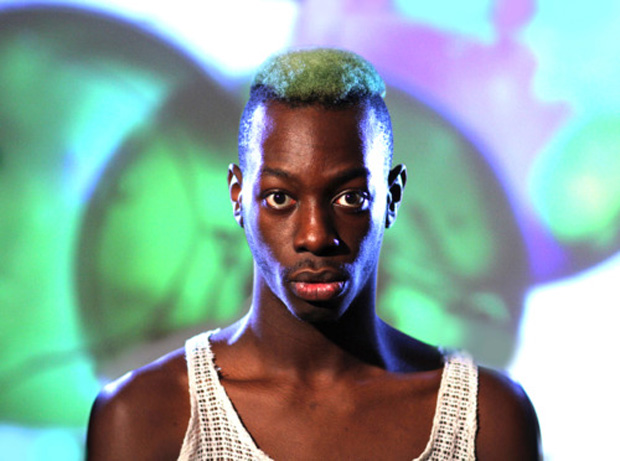 Yes! Next month we’ll be hosting LE1F of critically acclaimed mixtape Dark York, and the producer of such varied material as epic #seajunk daydream songsuites and the winking-ha of “Combination Pizza Hut and Taco Bell” and this ol Burial remix I used to drop in my BR sets years ago.

So this also feels like a long time coming, and I couldn’t be thrillder (trillder?) about LE1F’s support that evening c/o of the NU LIFE crew, who just last week got some well-deserved local love —

I’ve long thought that what Rizzla & D’hana & co have been cooking up at NU LIFE and other things around town is pretty much one of the best — and most original — things Boston has going for it. They bring some real vision to the party, as the article delves into, and/but the way their particular musical address — including the songs of Buju Banton, their orthogonally anti-gay comrade (I’ll have to explain that one sometime) — hails a particular cross-section of actually existing Boston diversity.

Ironically (or not?), NU LIFE is going out on top, ending their 3-year residency at Zuzu in Central Square next Tuesday (June 5), and shifting toward being more mobile & flexible. Sounds like a good move to me; I look forward to the next edition, wherever it may pop up. Meantime, we couldn’t be more happy to host a special post-NU DEATH jam with the NU LIFERS, including a rap set c/o Micah Domingo. Need I say more?

Better to let them say it themselves. Here’s a lil blurb they wrote for the Phoenix to provide a little context for their driving NU DEATH mix (which puts me in such fine company, I’m blushing):

Nu Life has hosted some incredible DJ’s and producers, including Kingdom, Venus X, LE1F, Wayne Marshall, Jubilee, Massacooramaan and Physical Therapy. The vibe can range from 90’s dance b-sides to underwater reggaeton house party. This mix is a blend of some styles we love – club and vogue beats, afflicted big room house, juke and harder rave music with twerk vocals. It’s a mixture of Rizzla’s own remixes and productions, the new school anthem YOU by Fade to Mind label head Kingdom, queer vocalists and amazing Boston-based producers like False Witness, Dev/Null, and Wheez-ie. 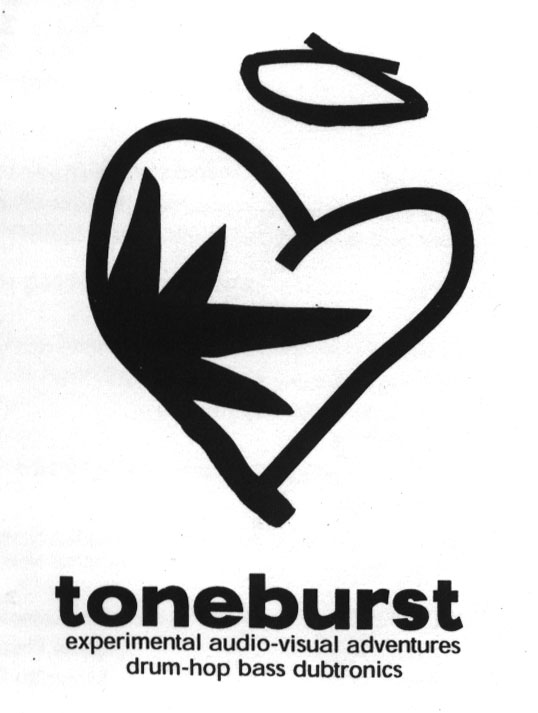 I can’t even begin to describe how amped I am for this. It’s a little incredible, to say the least, that all of these amazing DJs — who have all pursued impressive solo paths — will be back in town and in the same building, stirring up some good ol cross-genre, art-rave sociability like they used to make together, on the regular, as the Toneburst Collective.

This is an absolute dream bill, far as I’m concerned, and a historic occasion. I’m grateful to all of these folks for helping to make it happen! For the record, I was never a member of the collective, though as I recollected admiringly some 7 years ago (!!) —

as more of an occasional party-goer than a core participant, i first approached [the Toneburst aethetic] with a fair deal of wonder and curiosity. sounded like some stuff i’d heard before, but then again it didn’t. i liked that it somehow represented boston (a town woefully marginal on the musical map), but i wasn’t sure how exactly. somehow the music was both smart and gritty, though, which seemed right.

Given the way things have turned out in this mashy, remixxy world — not to mention how Jace & Jake & Keith & Larisa &c have all fared in their own pursuits — I’d say they were onto to something back then.

Beat Research is but one local torch still held aloft for the Toneburst spirit, and I couldn’t be happier about how brightly we’re gonna burn this summer.

5 thoughts on “Summer of Beat Research”