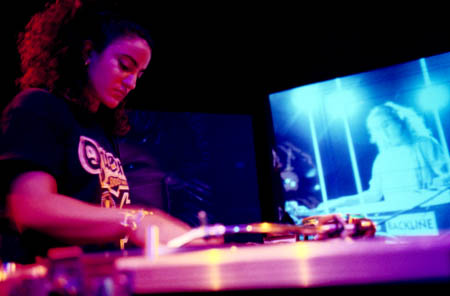 I was excited to find in my inbox today a link to a brand new LP by one of my favorite artists from whom I hadn’t heard much in a while: the mighty Mutamassik! It’s called That Which Death Cannot Destroy and the liner notes very plainly state that it “cannot be bought or sold.” My man Brian Coleman framed it as follows:

I guess she’s just completely fed-up with the music industry so doesn’t even bother trying to sell stuff, just offers it out and lets the karmic wheel spin. So definitely pass the word along to anyone and everyone you know who would be down with what she’s doing – personally I think it’s amazing stuff.

I do too, and I’m happy to help with the karmaloop. Consider the word passed along; the link too—

>> Mutamassik, That Which Death Cannot Destroy

Before the sounds of the Middle East became de rigueur sampling materials for hip-hop, Mutamassik was exploring ways of fusing various sounds and styles into a compelling, challenging whole, shards a-flying all the while. It’s no surprise that she and /Rupture got together for some un?(w)holy matrimony.

Let’s celebrate Mutamassik’s ongoing industry and willingness to share by enjoying and spreading her music, “motivated by funk and apocalypse” (click to enlarge) —