Amazing how an Amazon link makes our book finally feel real. (Pre-orders in teh house!)

And though they don’t have any imgs yet, I’m happy to report that I do, and — having lobbied HARD for this particular photo by Miguel Luciano to grace our cover — I’m thrilled to share it with y’all: 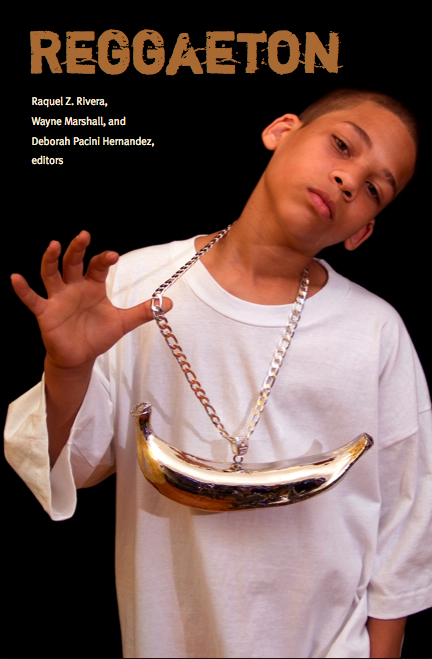 On the other hand side, I may be as excited about the back cover as the front, since we were able to land such luminary thinkers and wordsmiths re: music and race and nation as Jeff Chang, Mark Anthony Neal, Juan Flores, and Residente (!). 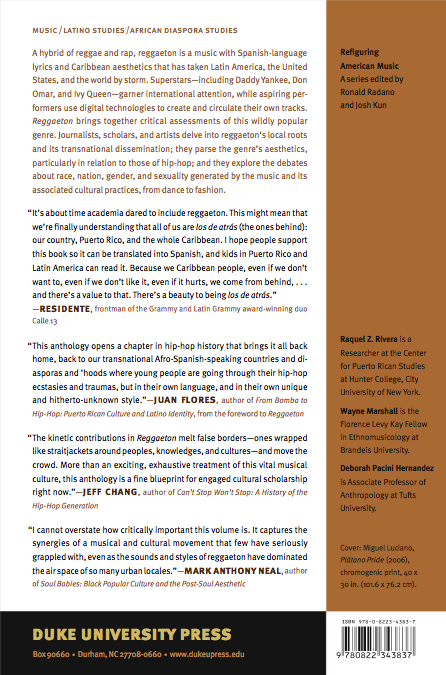 Since I’m in a sharing mood, here’s a pdf of an article by Flores that makes a wonderful argument about diaspora “as source and challenge” what with its many “cultural remittances” “from below.” (Incidentally, Centro is offering many more pdfs at their site; see, e.g., the 2004 issue on “Rican Structing Roots / Routes,” from which this piece comes.)

Flores’s narrative centers on salsa and rap, but I’ve found the thesis utterly illuminating wrt reggaeton (as readers of my chapter in the book will see) —

& while I’m at it, here are two excerpts featured on a relatively recent Tego mixtape (almost a year old now, actually). I offer these up as each wonderful examples of how reggaeton “works,” if you will, consistent with the rich remix/reference culture that it is.

The first is a reworking of Fabolous’s unavoidable track from last year (and/or 2007), “Make Me Better” (incidentally, is it just me or does that central string motif sound awfully close to a recurring bit from the Lost score?). We hear here, among other things, how reggaeton artists — just as their “underground” bredren did in the 1990s — continue to version contemporary US/urban pop, translating and transforming the sounds that surround us:

As you hear toward the end there, that track leads into a rowdy cumbia parody (sounding remarkably similar to a Manu Chao song in the chorus). I like how it shows reggaeton’s ability to incorporate / allude to other genres — and the “cultural work” inherent to such (re)figurations — not to mention how it shows off reggaeton’s (and Tego’s) sense of humor, with El Negro Calde putting on an extra coarse accent for “realism”:

* for some reason, the tracks above sound distorted when listened to through the player; click on the song titles to hear more clearly.