The following piece was published in December 2016 in The Wire‘s special issue, Spirits Rejoice: Sacred Songs, Divine Drones, and Ritual Rhythms (#394). I was excited by the call for pitches because I’ve been connecting lots of dots in my music history courses at Berklee between sacred and secular traditions, and I’ve become more and more impressed by the profundity of their imbrication and the global heritage that has resulted from so many people insisting on what we might think of as a “funky” form of sacred, spiritual experience. (I was also delighted that they liked my title, which seemed quite irresistible in its own connecting of dots and blurring of lines.) As usual, I’m posting a slightly enhanced version here. You can download a scan if you prefer. 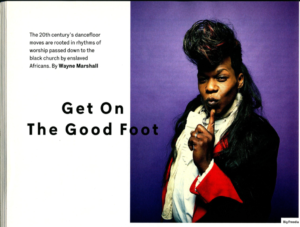 “The devil should not be allowed to keep all this good rhythm,” said an unattributed but oft quoted elder of the Holiness church. Staking claim to a cherished heritage of music and movement, this intent to worship funkily, it turns out, has carried the benefits of such practices well beyond the church. If not for the Holiness, Sanctified, and Pentecostal churches in the United States—particularly those embraced and transformed by African Americans–if not for their insistence on keeping rhythmic, ecstatic movement central to religious experience, the whole world might dance differently.

Prior to the Civil War, enslaved Africans creolized and reimagined traditional forms of song, dance, and ritual, most notably in the sometimes surreptitious institution of the Ring Shout. Here, to shout is not to yell but, essentially, to move together. A circle of participants shuffle counter-clockwise singing call-response refrains to polyrhythms produced with any available object, from broom sticks and washboards, to hands clapping, to feet on floors—often studiously avoiding lifting the feet off the ground, crossing legs, or other movements connoting the supposedly secular realm of “dance.”

Whatever we call such ritual movement, and wherever we draw the line between the sacred and secular, these practices nurtured by the “invisible church” of the enslaved would proceed to inform all manner of music and dance related activities across the United States and, eventually, with the circulation of popular, commercial media, far further afield.

While we don’t tend to associate the spirituals of the nineteenth century with dance music any longer, in accounts of the Camp Meetings where the genre emerged—rural, interracial gatherings of thousands that could last for days on end (sometimes with Ring Shouts in the wee hours)–contemporary observers hear the spirituals possessing a troubling connection to the rhythms of work and play. As John Watson noted in Methodist Error (1819): “the coloured people get together, and sing for hours together, short scraps of disjointed affirmations, pledges, or prayers, lengthened out with long repetition choruses.” Mashing up the hymns of the day with call-response refrains, African American worshipers enlivened these songs with the synchronizing, syncopating rhythms of work songs and hoe-downs (that is, breaks from work). “These are all sung in the merry chorus-manner of the southern harvest field, or husking-frolic method, of the slave blacks,” laments Watson, and they had “already visibly affected the religious manners of some whites.”

Scandalizing the orthodox with sacred songs that historian Eileen Southern calls “dangerously near to being dance tunes,” many spirituals share the same polyrhythms–syncretized and strengthened in the common crucibles of work and worship–as those that underpin the contemporary “secular” movements of country dances from the Virginia jig to the square dance to the Cakewalk, their caricatures in blackface minstrelsy, and their rebirth with ragtime, propelling the turn-of-the-century pop hits that got the whole nation dancing the same thrilling dances.

While the likes of Eubie Blake, Sydney Bechet, and Louis Armstrong all connect ragtime to the music of the church,* ragtime also emerges as secular dance culture via the post-emancipation rise of the jook–a new, autonomous, decidedly secular dance institution. In these raucous, raunchy spaces, group dances were pushed aside by simple steps for couples like the funky butt and the slow drag. Notably, the jook enabled a reinterpretation of time-honored ritual dances: here the buzzard lope–a form of danced mythology depicting a vulture circling carrion–could be reimagined as a coquettish flirtation with a partner. But for some, this movement from sacred to profane–is that a tailfeather or a moneymaker?–was a shame. Devil’s music. But others knew these rhythms never belonged exclusively to the devil.

Despite the jook’s ostensible monopoly on “dance,” it would be foolish to underestimate the ongoing interaction and influence between secular styles and sacred practices, especially with the rise of Sanctified and Pentecostal churches. “According to the evidence,” writes Southern, “the musical practices of the slave ‘invisible church’ were passed on to the post-emancipation folk churches with full vigor.” The Pentecostal church called for “full participation of the congregation in all its worship activities” and employed music “to a degree that probably is not attained in any other denomination.” In time, the increasing use of instrumental ensembles in churches brought “the kind of rhythmic intensity formerly associated with dance music” even more directly into sacred contexts—and vice versa. Lindy Hoppers doing the Big Apple in the late 30s broke from couples to form a ring and swing themselves around the ballroom counter-clockwise

By the time we get to the early 1960s and the Twist, a song and dance conceived by a black gospel quartet, one could argue that the dance–and the craze of related steps that soon followed–“owed a notable debt to black churchgoers,” as Elijah Wald contends: “steps that looked a lot like the mashed potato and the pony had been commonplace for decades in the less sedate black churches, where congregants seized by the spirit kicked out in footwork that the go-go dancers of the 1960s could only envy.” How ironic that Duke Ellington could be “amused to see his upscale white fans doing moves that had once been reserved for Cotton Club chorus girls” yet these same moves might be indistinguishable from movement otherwise construed as ecstatic, sacred practice.

A simple step that almost single-handedly ushered in the de-coupling of America’s dancefloors, the Twist gave women the freedom to dance on their own and to take the lead. It initiated a seismic shift in social dance norms culminating in the rise and eventual dominance of solo club dancing, an approach that comes into full flower in the 1970s underground dance scene that spawns disco–a genre with a striking penchant for churchy “divas” exploiting the full-range of gospel expressivity. Shifting from a single partner to a dynamic relationship with the dancing collective, this form of social dance can resemble a platonic ecstatic-cathartic release that even some church elders might approve. According to historian Tim Lawrence who argues that “the dance experience of the 1970s was experienced as a spiritual affair,” dancers at such seminal, proto-disco spots as the Sanctuary (a former church), the Loft, the Gallery, and other venues did not understand such dance as “the first stage of seduction”; instead, “[r]evelers refigured the dance floor not as a site of foreplay … but of spiritual communion.”

In this light, it should come as no surprise that many clubgoers, especially devotees of house and techno, think about going out dancing as “going to church.” This overlap convinced architects of Chicago’s post-disco underground to enlist powerful, church-steeped singers to belt songs over booming, entrancing beats. Jesse Saunders recounts how central “very soulful and uplifting,” gospel-inflected vocals were to the transcendent sets of Frankie Knuckles. When Saunders collaborated with Vince Lawrence on the breakthrough hit “Love Can’t Turn Around,” they recruited locally renowned choir performer Darryl Pandy for revealing reasons. “He was very churchy,” remembers Lawrence, “and we thought that the kids were into that spiritual shit, man, motherfuckers yelling and screaming on the records. So we thought that he would go over like gangbusters in the club.”

If it still seems farfetched that ecstatic religious movement could so closely resemble raving, simply seek out one of the various video mashups on YouTube tagged “church rave.” Juxtaposing footage of worshippers catching the spirit with vintage drum’n’bass sessions, these videos cheekily but compellingly make the case for the sacred, ecstatic roots of modern club dance. (Musical kinship too: check out some unadulterated “praise breaks,” often hovering between 180-200 bpm, to hear the sacred counterpoint to gabber or punk.)

Although the sacred and secular can seem so separate as to suggest such parallels are purely comical, it is important to remember how blurred these lines have long been. The ragged-up funeral marches and second-line festivities that prefigured jazz, and which continue to provide communal solace and celebration, offer enduring examples of African Americans’ persistent efforts to maintain a certain spiritual holism. Today in New Orleans that torch is carried not only by brass bands but by Big Freedia and other bounce artists who conduct twerking parties as part of a memorial service. The profanity and explicit sexuality of bounce would seem at odds with solemn religious ritual, but the elemental act of shaking one’s ass–at once, ecstatic, cathartic, expressive, and free–apparently taps into appropriately deep connections to ourselves and each other. Formerly a church choir director and still a pious Christian, Freedia has described what she does as “spreading the gospel of shaking your ass.”

Like so many of her musical forbears, Big Freedia approaches this mission generously, an ambassador of booty shaking and a believer in its therapeutic benefits. She’s even happy for the Mileys and Beckies** of the world to get their twerk on, if less sanguine about being unattributed while quoted. Forged and nurtured amidst all manner of repressions and travesties, the priceless joys of such dances constitute a hard-won prize for many, yet these deeply resonant forms have traveled beyond the circle rapidly at every historical juncture. They now stand as a kind of global cultural heritage, a way for all to dance together and transcend. If the devil were allowed to keep all this good rhythm, we’d all be damned.

* the paragraph has been condensed but I’ll paste the original here for the quotes from Bechet, et al.–

The New Orleans clarinetist Sydney Bechet resisted the term jazz as a sordid sign of white commodification and insisted that he played ragtime, a musical style he explicitly connected to the spiritual tradition: “When I tell you ragtime,” Bechet wrote in his memoir, “you can feel it, there’s a spirit right in the word. It comes out of the Negro spirituals, out of [my grandfather] Omar’s way of singing, out of his rhythm.” Fellow New Orleans legend Louis Armstrong noted similar connections between popular, secular music–from ragtime to rock’n’roll–and sacred traditions: “At one time they was calling it levee camp music, then in my day it was ragtime. … And all these different kinds of fantastic music you hear today–‘course its all guitars now–used to hear that way back in the old sanctified churches where the sisters used to shout til their petticoats fell down.” According to historian Dave Gilbert, the ragtime composer and piano virtuoso Eubie Blake “claimed to have first heard ragtime at his mother’s church, even though she would not have considered it that way.” This musical kinship also turns up in the popular compositions–some directly tied to downright dance crazes–of James P. Johnson, the pioneering stride pianist who wrote the “Charleston” and the tellingly titled “Carolina Shout” and who, like Blake and so many others, got his start playing piano and organ in church.