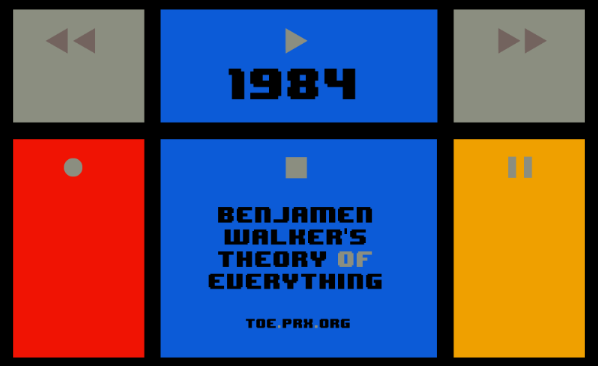 No one does radio (by which I mean, audio storytelling) like Benjamen Walker. You may know him from his incarnations as the host of Your Radio Nightlight, Too Much Information, or Theory of Everything, which has recently become one of the flagship programs in PRX‘s new podcast network, Radiotopia.

I feel very lucky to count Ben as a friend. His incisive sense of humor consistently cuts to the chase of the kinds of things we find ourselves concerned about in this modern world, or should be. His commitment to running down good stories and telling them with audio aplomb is downright inspiring. Man oh man, the stories he could tell…the stories he does tell!

So I’m thrilled to report that Benjamen has made one of the best episodes of his life with “1984.” To put it plainly, this is a monumental work of media history, largely sourced from YouTube (but also via vintage TV Guides, the Ronald Reagan Presidential Library, & his own rich trove of alienated adolescent experience). “1984” is a deeply engaging examination of, as Benjamen puts it, the year, not the book.

I found myself totally entrained and entertained listening to it, and you will too. Benjamen masterfully interweaves and teases out trenchant themes as US society tries to come to grips with the advent of the hyperreal and media politricks in precisely the year that George Orwell freighted with such significance. Borrowing Orwell’s central narrative conceit of the diary is a stroke of genius on Ben’s part, but it’s the dazzling execution of his vision that is most impressive. Imagine Marclay’s The Clock stretched out over a calendar year with grainy advertisements and newscasts in place of Hollywood film fragments.

Here’s how Benjamen frames it:

In 1984 your host was twelve years old, and like Winston Smith he kept a diary for the citizens of the future. For this special installment of Benjamen Walker’s Theory of Everything we travel back in time and give this diary a soundtrack. TV commercials, radio spots, movie clips — all from 1984 (the year, not the book). Along with personal memories of making the transition to middle school the show focuses on four of the most important people of year: Ronald Reagan, Michael Jackson, Steve Jobs, and Clara Peller.

Do yourself a favor and make some time for this one. Ben brings the beef, no doubt.