I’m happy to report, as exhorted about back in December, that Filastine & his collaborators, Nova & Tooliq, have completed the first of the two videos they successfully kickstarted. 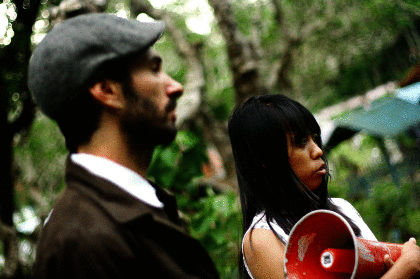 Before I offer an embed, allow me to cut-n-paste their poignant, soulful framing of the project and its settings & subjects —

Colony Collapse is filmed at sites of ecological friction, the fault lines of conflict between humanity and (the rest of) nature. For examples we used….

Lapindo (Sidoarjo) Mud Disaster is an eruption of scalding mud and flammable vapors triggered by a gas drilling gone awry. It has buried more than a dozen villages and blocked a major highway, and is expected to keep expanding for the next 25 years. Lapindo is located close to the home town of the the director (Tooliq) and singer (Nova).

Below a freshly shattered dam on the shoulder of Merapi mountain. This required a meeting with an important Islamic mountain shaman, who wanted to know we weren’t up to anything frivolous or disrespectful. After the vetting he sent his crew to guide and protect us, some men went upriver a few kilometers to warn us by mobile phone if a new flood was coming down.

Bantar Gebang is a landscape of trash. Garbage stretches farther than the eye can see. Mountains, rivers, and even villages where the trash-pickers live. Not something easy to summarize in words.

A supermarket nested in a mega-mall within a skyscraper. Air conditioning, shopping carts, muzak, just like any posh supermarket. But right outside is a the permanent traffic jam of Jakarta, a sprawling mega-city of at least 10 million.

Thanks to the many who graciously tolerated us filming in the midst of their disasters: be it a sea of toxic mud or just the daily commute. Extra thanks to those who hosted, drove, filmed or loaned gear. And of course it wouldn’t have been possible to complete without all of you who contributed to the Kickstarter campaign.

It’s a vivid, stunning piece of work. If you have the luxury, take Filastine’s advice and watch it in HD with some headphones or through speakers with a good subwoofer. If you don’t, no doubt there remains plenty to see and hear here —