For this week’s “Back Talk” — the Q&A that runs on the back page of the Phoenix — I had the pleasure to pose a few questions to Nancy Baym, a scholar who’s work (& Twitter feed) I’ve been following for a few, especially as my own research turns more to questions of music “industry” in an age of “social” media. 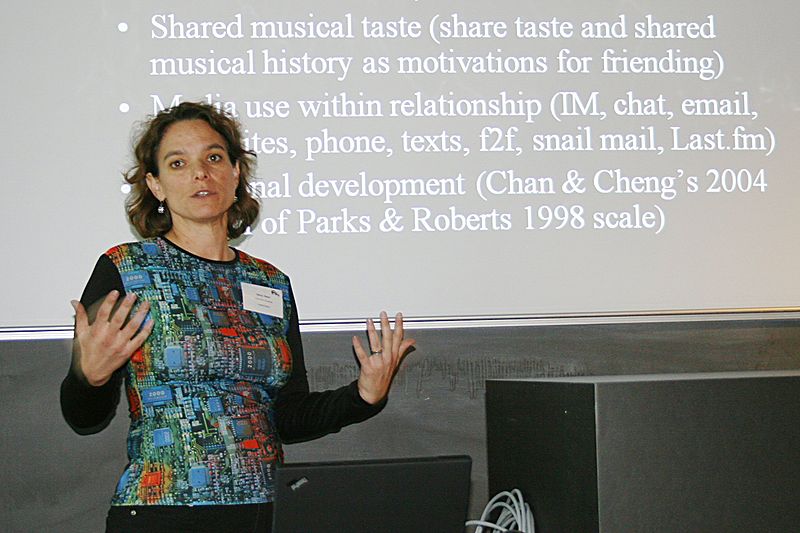 Nancy is coming (back) to town next week to take part in Rethink Music, “a solutions-focused conference” being staged by Berklee and MIDEM “in association with” the Berkman Center & Harvard Business School. I was also supposed to join a panel there, but I withdrew from the program a couple weeks ago based on contractual language that seemed, in short, out of step with any meaningful “rethinking” or reform of the way business gets done in “the” “industry.” (I was surprised and disappointed that the “association” with the Berkman Center failed to produce better boilerplate.)

I confess that I was lukewarm to the prospect anyway: the last thing I want to do, really, is to forestall the crash-and-burn of the current regime by sharing ideas about creativity and grassroots practice with them. (Though I’m still wondering who the audience will be for this event, given the hefty pricetag.)

At any rate, I’m happy to contribute in my own little way to any rethinking that might happen here in the next week by amplifying some of what Nancy has been thinking and writing about recently. You can read the full interview online here (the physical paper features an abridged version), but allow me to share a pull quote or two —

Does the question of “social exchange” (as opposed to economic) become more important in an age of “social media,” or just more noticeable? Where does something like (unpaid) “fan labor” fit into the equation?

Social exchange is both more noticeable and more important. It’s always been there. When I talk to musicians about what they find most rewarding in their engagements with audiences, they never talk about the fan who paid them $100 for a CD when they were only asking for $10. They talk about hearing that their music helped someone deal with a loved one’s death, they talk about realizing people had traveled far just to see them perform, they talk about receiving art that fans had been inspired to create because of their music, they talk about getting to travel and meet people in different cultures. These are all social rewards and none of them rely on social media, though they often arrive through those means.

Fans engage in unpaid labor for social reasons rather than economic ones. In fact, they often view monetary compensation as devaluing what they do, which is common in fan communities. They do what they do for one another because they want to share the pleasure they take in the music. They also do it to build their own status in fan communities. They do it because it brings more music into their inbox. They do it because it’s a way to form social relationships with the artists they love. Sometimes they do it to build a base for a career in music themselves, and some do move on from running a fan site to working for the label, but it’s rarely intended from the get-go as a way to make money. Just as people in the music industries need to recognize the social values that matter in the music ecosystem, people who think about the work fans do as exploitation need to recognize and respect the social rewards that these fans receive and value in exchange for their labors. That said, the potential for exploitation is always there and is something everyone involved should be sensitive to.

Your current research has brought you into conversation with rock stars, singer-songwriters, and globetrotting DJs. Are there ways in which certain genres lend themselves better to this moment of transition/disruption?

It’s been hard to get a pulse on this, because even within genres people are having such different experiences. Genres that are already heavily technological (like electronica) or highly personal (like singer-songwriters) lend themselves better to this era, the former because they are already game for experimenting with technology and playing with technological mediation as a means of creating connection, the latter because there is already a sense of intimacy and personal connection between musician and listener. But it’s really more about the attitude of the individual musicians and the team of people they’re working with than about the kind of music they’re making. This moment serves people who like to socialize with strangers and acquaintances, it doesn’t serve people who prefer to be private and just make music. Those differences exist within as well as across genres.