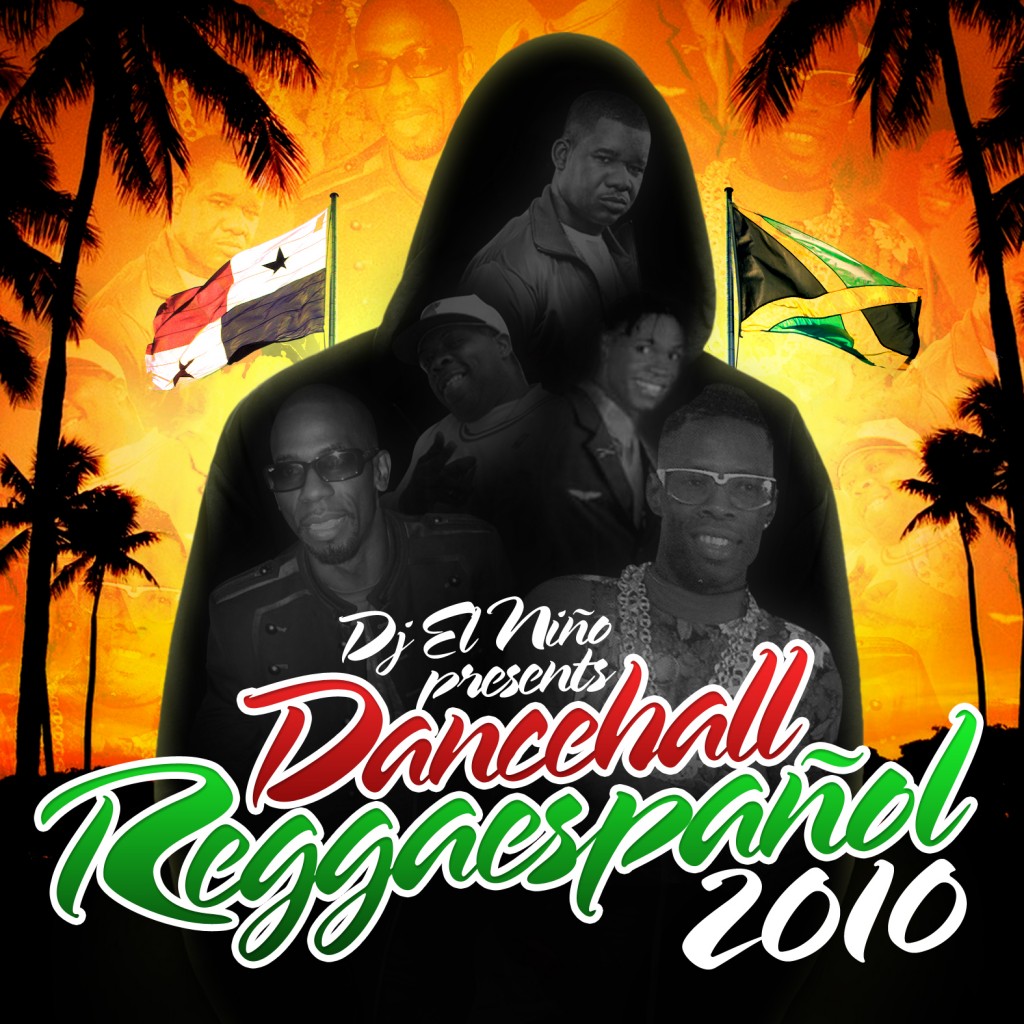 I first got in touch with DJ El Niño several years ago, dead in the middle of a little research project that would finish like this. (Incidentally, my co-editor Deborah Pacini Hernandez just publlished a new book which is well worth checking: a sweeping and deep synthesis of the history of Latin American popular music, Oye Como Va! includes a stellar chapter on cumbia’s migration from Colombia to Mexico, and beyond, which begins with a quote from former Heatwave specialist, Gervase de Wilde!)

Although his contribution to my research goes beyond what made it into the chapter I wrote, I do quote some of my correspondence with El Niño a couple times in the piece, complete with “lols” and such in order to maintain a sense of, as I put it in a footnote, “the tone of the exchage.” Here’s one of my favorite such bits:

According to DJ El Niño, the embrace of bachata by reggaeton producers was a marriage of convenience: “people who were into reggaeton hated bachata,” he recounted via email, “it even got dissed on some early reggaeton tracks…as things became more mainstream (including bachata) and not so underground it became ok and then u see watt happens now they all have at least 2 ‘bachata’ tracks per cd…lol!!”

As a DJ who had already been playing Latin dance/club parties in the tri-state area and beyond for many years, El Niño had some great perspectives on the historical arc of reggaeton, and how it related to all the other styles he played: bachata, merengue, salsa, house, freestyle, Latin hip-hop, reggae, pop. In the years since, we’ve continued to go back and forth, connecting dots between Jamaican dancehall and what some call reggaespañol, IDing riddims and cover versions, etc.

Doing the research for my chapter, and digging into what was also (maybe misguidedly) referred to as Spanglish Roots N Hall, turned me into a big fan of the early days of Spanish-language reggae. Sometimes it tips toward the cheesy, but a lot of reggae walks that line, especially in the synth era. It was by listening to a 1991 compilation on Columbia records, putting Jamaican originals and Spanish covers side by side, that I began to better appreciate reggae’s routes and reggaeton’s roots — the transmission / translation / transmogrification of Jamaican reggae into Panamanian plena and Puerto Rican reggaeton.

Keeping the torch aloft for the somewhat liminal genre, DJ El Niño has put together a comp of his own devoted to reggaespañol. (I love that it’s called “Dancehall Reggaespañol 2010” despite featuring songs that are all about 20 years old! #atemporality) Like the Columbia comp, it also draws audible threads through the recordings, as registered in the riddim-wise tracklisting. Apparently, our exchanges about this stuff have been deep enough that El Niño even gives W&W a shout in the artwork! So consider this something of a W&W “exclusive” — but do spread it far and wide! 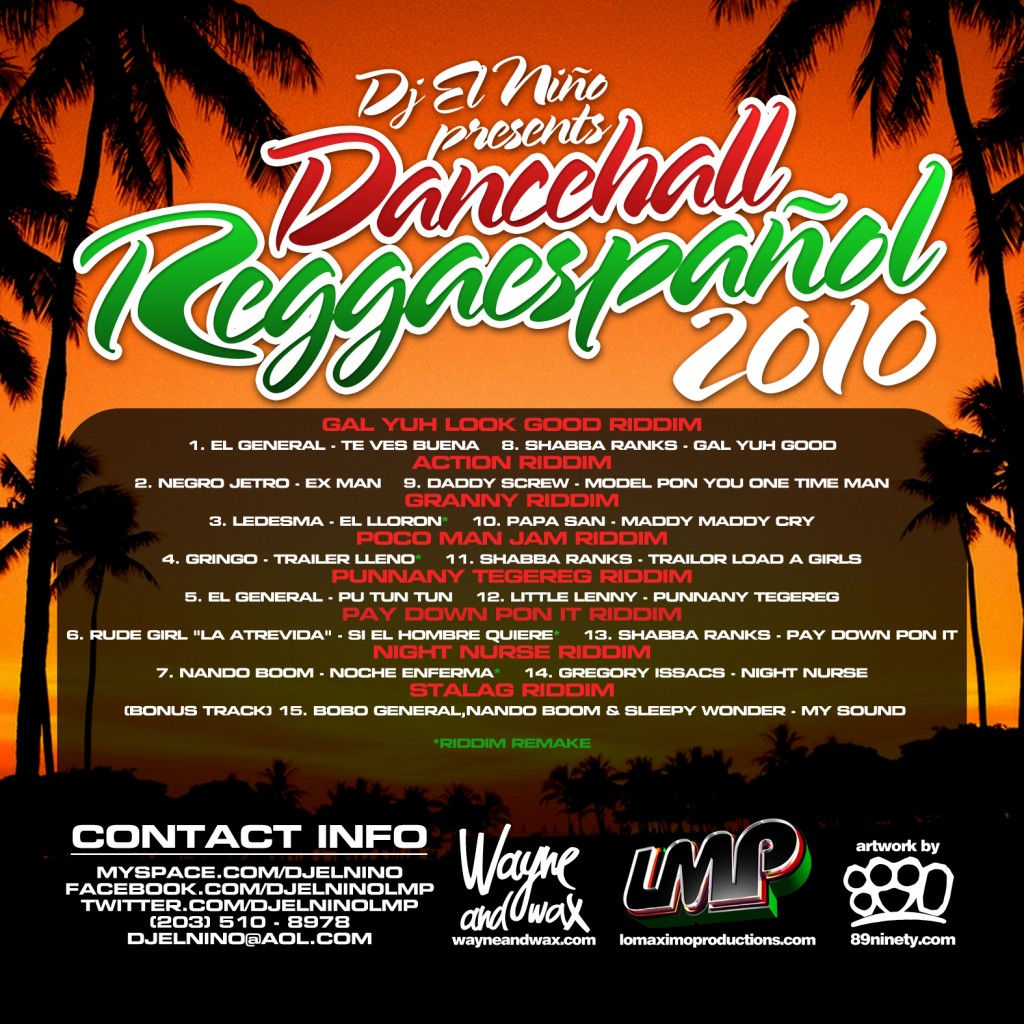 Oh yeah, yo DJs!: this isn’t one big mixed mp3, it’s a collection of non-mixed, meta-massaged, mastered tracks for your listening and mixing pleasure. But you should really appreciate the level of detail provided by a working DJ like El Niño himself. As noted in Gmail —

1.cd is non mixed
2.properly tagged(bpm,date of release,cover,riddim name, etc… so its serato/dj friendly)
3.all songs were edited(eliminated silence space, fixed volume and eqd)
4.all songs are 192k and ripped by me from original cds (unless indicated)
5.all songs come from cd except track 15 (vinyl rip converted at 160k) and track 14 (ripped by a friend at 128k from cd)
6.all songs are in their original state except track 15 is pitched up a bit(not much) and track 11 which is the club version from the maxi single(i cut the instrumental section at the end which rides close to 2 min)(all shabba ranks cds use the club version but fade it out at the last chorus all i did was let the last chorus ride and fade it out after)
7.some jamaican songs have differnt versions (ie gregory isaacs song was done by arzu and included in the original cd,papa san song was also done by shabbacan/shabakan..the version i included is by ledesma which was a big hit in ny and dr radio)
8.the only non panamanian/jamaincan on this cd is ledesma…..hes dominican
9.theres some tracks marked with an arterisk which means the riddim is not the original(redone)
10.i have tracks to do at least 2 more cds
11.i included some songs from the original cd cus i felt they are better situated in this compilation
12.i think i said it all…ure the first person to have this…review it ,posted in your site(added it to the cover), give it to ppl, do what u must to “spread” the knowledge(cd).once you have done what u could i will posted in every forum imaginable(feel free to help)

ps once again all songs come from original cds except track 15 .theres some songs that u can hear a “pop” here and there.thats because the cd was done from a “vinyl master”(which sucks) examples are trailer lleno,te ves buena,noche enferma

And for those of you who’d like to continue compiling some summer mixxage for your mobile devices and such, El Niño also shares his latest confection (and I use that term purposely). But be forwarned: this short “pop” mix is bookended by Ace of Bass and Cher, but it takes some nice twists and turns in between.

Or for those who are looking for something very different, here’s a 1999 mix devoted to “Latin Hip Hop.” In typical fashion, El Niño reports: “some goodies in here including tegos first song and a blend i did with puff daddy…lol”

Finally, you can find much more from El Niño & crew, Lo Maximo Productions, on this page.*

* One of the mixtapes listed there is Sensato’s El 28 (por DJ Scuff) — I don’t know what LMP’s role in that is, besides spreading it further, but it’s well worth grabbing if you’re over there. We listened to it last weekend on the drive from NYC back to Boston, and it had my mind blown / side in stitches over & over. Dude can flo! [Update: El Niño clarifies.]