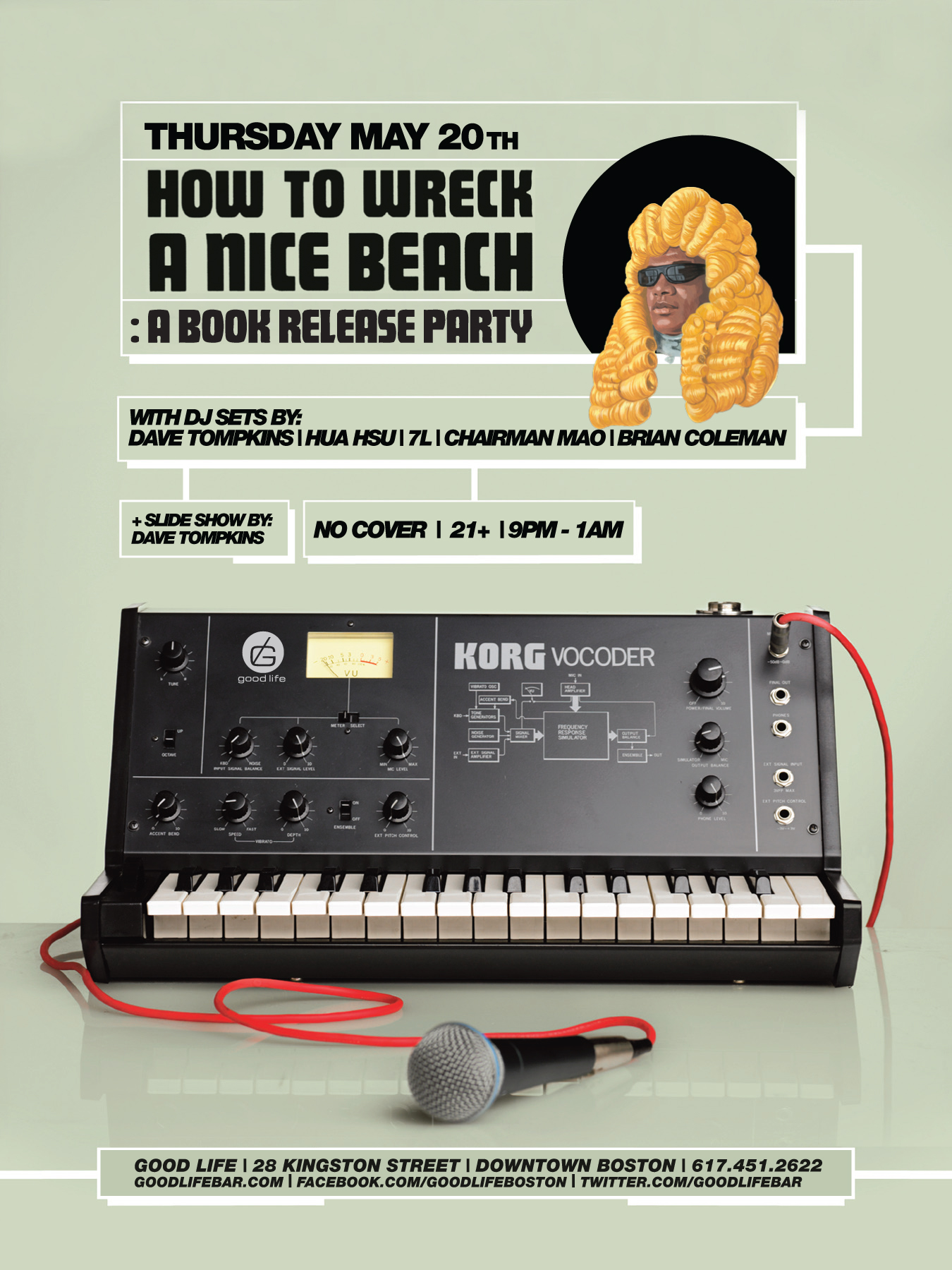 I’ve been trying to get Dave Tompkins to come do a reading in town this spring from his much anticipated and well-worth-waiting-for book, How to Wreck a Nice Beach: The Vocoder from World War II to Hip-Hop (Stop Smiling 2010). An afternoon at MIT followed by a night of vocoder-animated Beat Research seemed pretty apropos, but thanks to Dave’s busy touring schedule, that’ll have to wait for the fall when the students are back in town.

For now, I’m enthused to report that Dave will be striking while the book’s hot off the presses — and rounding up several of the knowingest headz in the Greater Northeast to drop robot-vox’d electro jams and other space oddities in support. For reals, with a lineup featuring the likes of Chairman Mao, Hua Hsu, 7L, and Brian Coleman, we’re talking about some serious rapmuzik braintrust in the house. And the Good Life has a pretty accommodating system for big slabs of thunder-croak proto-crunk.

There’ll be a slide show too, and believe me, you want to see these pics blown up. I’ve been working my way through Dave’s book in little sittings for a couple weeks now, and it’s a beautiful thing to behold. Almost every page has some awesome (and awesomely captioned) photo in it. (Props to Stop Smiling for making this sort of package pretty affordable.) The whole thing is just brimming with arcane knowledge jewels. And Dave has long been one of my favorite hip-hop writers, a man with his own muse to be sure. Plenty of times he’s way over my head (and maybe in over his own — though I don’t get that impression). Either way, I want more music writing to be like his: informed, imaginative, idiosyncratic.

To whet, here’s one of my favorite passages so far, drawn somewhat at random since, really, such nuggets are a dime a dozen (all dimes well spent, I might add). Fifty pages into the strange history of the vocoder, we’re told that —

Hollywood would have to wait. All things wondrous, stupendous, complicated and confusing must report to the army first. Though the World’s Fair could make claims on the future, the military officially had dibs on tomorrow. Long before the vocoder played the voice of a missile-happy Cold War supercomputer in 1970’s Colossus: The Forbin Project, it held an underground desk job, scrambling the phone calls of the army’s triple-chinned brass. Patriotic orders to fill, eggs to scramble. Things to come, things to do.

Writing in the New Yorker, Martian-mongerer H.G. Wells precidcted that the World’s Fair would introduce teleconferencing, a snooze button of a prophecy but less dooming than the atomic conflict he foresaw in his 1914 book The World Set Free. Ray Bradbury, the loud blond dreamer, was terrified. No squid lady could distract him from the prospect of the sky above whistling straight to hell.

Those at the Fair who eavesdropped on Bradbury’s free call to Los Angeles probably just admired the clarity, marveling at voices shooting across time zones. Perhaps they mistook his modulated quaver for homesickness, not the fear that he’d never again see his parents. I love you. I miss you. I’m broke.

“We were a few days away from World War Two,” he tells me. “The sense then was that in a few months the world was going to destroy itself. The world then proceeded to kill forty million people. I thought I might be destroyed too. I looked up into the sky, smelled gun powder and saw the war coming.” That night, July 4th, standing in the glow of the fireworks, the world’s blindest stegosaurus fan saw the sky on fire and cried.

For more, see some of Dave’s previous writings collected over at Stop Smiling. I also recommend this lengthy Q&A with Mike Powell. And do pick up a copy of the book. Ten years in the making, “support” hardly says it.

So, see you there, my locals? I mean, I’m saying: Boston is pretty close to Ground Zero for the vocoder. Wreck a nice.