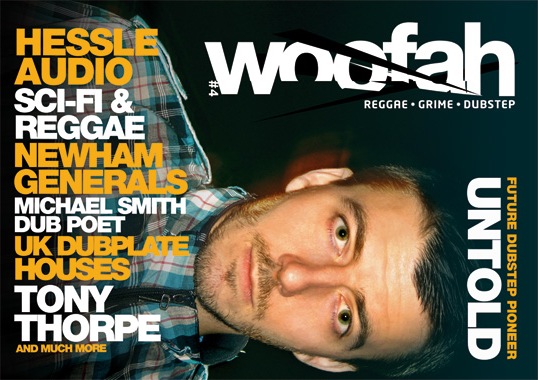 The latest Woofah — a UK-based magazine covering the latest and greatest in bass culture — is finally out, and it’s a big, glossy whopper of an issue. What’s more, yours truly has a thinky-piece in it exploring the fraught relationship between Afrofuturist reggae musicians and the Rastas-in-Space projected by Hollywood films and sci-fi authors (big thanks to everyone who helped me catalog the myriad instances of this trope).

The article/magazine is not available digitally, just as good ol’ print-on-paper. And all the back issues of Woofah have sold out, so if you want to snatch up a copy head over to the Woofah site. Meantime, here’s a juicy quote to whet the appetite:

The impossible survivalism expressed in a line like Sizzla’s refers of course to the contemporary, to the postmillennial perseverance of the perennially persecuted, a dubiously “chosen” people. “4000 years,” he intones, “yet no one cares,” projecting a legacy of slavery well into the past by yoking the trans-Atlantic slave trade to the plight of the ancient Israelites.

But he could as easily be projecting into the future, joining a contrapuntal chorus of writers, producers, and artists who have imagined “techgnostic” Rastafarians in any number of possible futures and alternate universes. Reggae musicians and Rastafarians themselves have, of course, contributed the lion’s share of such visions, bending to their own earthy, deconstructionist purposes the devilish tricknologies they view with a healthy skepticism, turning recordings inside-out and Bibles “upside-down,” as British-Jamaican cultural theorist Stuart Hall once put it. Putting on “iron shirts” to chase Satan from earth. Meeting Space Invaders on their own turf. Dubbing culture into a parallel universe.

Taking their cue from this prophetic-dystopic tradition, right around the time that reggae and Rastafari were colonizing metropolitan spaces and media (“in reverse,” as Miss Louise Bennett once put it), white cyberpunk authors such as William Gibson and Bruce Sterling performed their own dubbing of possible worlds, bringing remarkably colorful and unkempt futures to life through the ironic shock of dreads at the controls. If we read them generously, we might hear how, by amplifying the additive rhythms of resilient Rasta technicians, these authors remixed sci-fi’s supposedly “raceless” futures which, by default, nearly always looked white, clean, covered in chrome. In cyberpunk’s dread futures, rather, archipelagos of black self-sufficiency – colonies called Zion, islands in the net – take root on the margins of unevenly developed worlds. Today’s planet of slums prefigure tomorrow’s improvised cybershantytowns. Rastafari stands alone.

Alien and alienated, these Rastas in space – as imagined both by reggae visionaries and sci-fi writers – appear as key avatars in what some have dubbed Afrofuturism, a field of cultural production inspired by Afrodiasporic musicians, writers of black (science) fiction, and cyberpunk authors, among others. On both sides of the Black Atlantic, cultural theorists such as Mark Dery and Kodwo Eshun have outlined and elaborated what sci-fi scholar Lisa Yaszek describes, in an essay on Ralph Ellison, as “an intellectual aesthetic movement concerned with the relations of science, technology, and race [which] appropriates the narrative techniques of science fiction to put a black face on the future. In doing so, it combats those whitewashed visions of tomorrow generated by a global ‘futures industry’ that equates blackness with the failure of progress and technological catastrophe.”

And yet, the other side of the coin to this critical challenge offers a funhouse-mirror distortion of dread. Just as 1950s science fiction films gave us now quaint images of their own anxieties projected into future worlds and onto alien races, Hollywood’s increasingly dreadlocked aliens of the last two decades, a timeline tracing seismic shifts in Caribbean-US demographics, gives us the postcolonial American version of sci-fi’s classically temporal/present vision of the future. Dreadful images, no doubt. But in a very different way than one finds in reggae or even cyberpunk (which nevertheless shares some strategies with Hollywood), filmic representations mobilize Rastafarian symbols – especially ‘locks – primarily to conjure fear, danger, and militant difference.

This is a story, then, of an other-worldy Jamaican music industry exchanging images and ideas with Babylonian regimes of representation. Dealing with the devil. Trading in futures.