The Jamaica Observer reports this week that a “recently formed” Rastafarian group known as the Ethio-Africa Diaspora Union Millennium Council “intend[s] to pursue the use of intellectual property protocols to protect and preserve the culture and symbols from misuse” — specifically, the kind of misuse embraced by self-proclaimed “Gangsta Ras” and dancehall flavor-of-the-month (but likely longer), Munga Honourable.

As recounted here recently, Munga’s “Bad From Me Born” has been mashing up the place back a yard. And some Rasta dem nuh tek kindly to his juxtaposition of Rastafarian symbols and gangsta stylings in the song —
[audio:http://wayneandwax.com/wp/audio/munga-bad-from-born-rip.mp3] 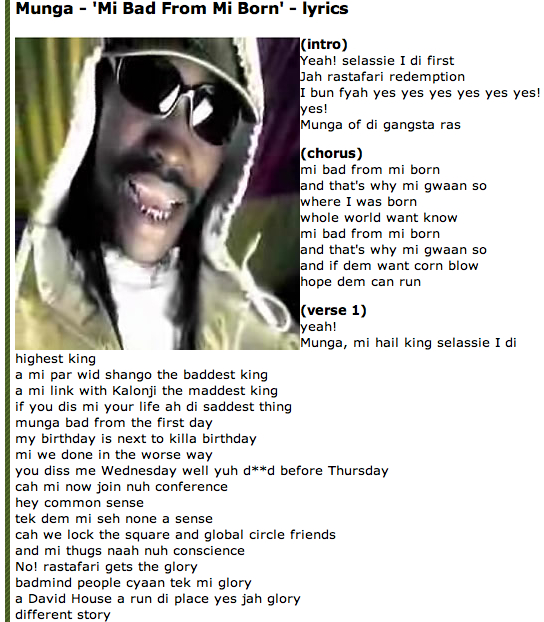 But why object to this sort of thing now? And why in this way? Previous (and perennial) Rasta reggae artists — Sizzla & Capleton (aka, Kalonji and Shango) come to mind — long ago opened this can of worms with their pragmatic anti-politricks politics of culture, reconciling chanting down Babylon with riding in a Bimma, thanking Mamas with pumping up pum-pums, & coulda-been-ing the most notorious with taking the righteous path. Fuckery and livity? Bling-bling for Rastafari? Something like that. I think. Damn confusing at any rate.

& of course, Rastafari has been inventing itself over and over again since its emergence, assimilating various changes in its own organization and sets of community relationships (across various churches, communes, & sects) as well as to changes in Jamaican society more broadly (such as mass emigration): near destruction in police raids and failed prophecies, international diffusion via diaspora and reggae, co-optation by the state and market (sometimes voluntary), and, of course, the apparent physical death of g0d. Accding to that line, today’s praggamatical® stylings seem hardly unorthodox. Drawing on contemporary, international “black” culture (heavily influenced by hip-hop) — and re-articulating Jamaica’s distinctive place in it — the next generation projects (their own versions/interpretations of) Rastafari as widely as ever, and as strongly locally too. About as strongly as one slaps one’s hand against the wall when Munga self-assuredly & crunktastically comes to “take his place.”
[audio:http://wayneandwax.com/wp/audio/Munga-Take_My_Place.mp3]

Finally, especially given the decentralization and openness to interpretation within/across the “community” (if we want to use the word in that abstract way we use it these days and in the only way it can apply here), it seems a little absurd for a Rastafarian group to call for, as one “Rastafarian attorney” puts it:

Protection against the misrepresentation, commercialisation and improper use of the name Ras Tafari, capital R, capital T; Rastafari as one word; and derivatives such as Rasta and the persona, the portrayal of I and I

I mean, are we really gonna ignore the irony here? I wonder what certain Ethiopians who lived during Haile Selassie’s reign — some who go so far as to call H.I.M. a despot — would think of such righteousness around the “misrepresentation” of Ras Tafari?

& while the explicitly anti-commercial stance here may be consistent with broadly held Rastafarian belief, and hence opposed to more recent praggamatic® readings of Rasta stricture, it seems to stand contrary to the last few decades of Rastafarian practice, during which time a number of prominent representatives (w/ reggae artists the most widely seen&heard) and a great many everyday people have flown Jah’s red, gold, & green banner for some humble profit in the market. And I’m not talking about wolves in sheep’s clothing, I’m talking about adored icons of Rastafari, people who have legitimated, spread, and often reshaped its tenets.

I don’t mean to imply, I hasten to add, that there is nothing strange — or downright wrong — about official Jamaica marketing itself with Rastafarian ideas&imagery while still marginalizing and degrading Rastafarians in wider Jamaican society. Or foreigners tiefing such signs to sell specious distortions.

But I’m not sure what’s worse, anti-Babylonically speaking —