In a recent issue of the SEM Newsletter (March 2007, to be precise), Phil Bohlman addressed the issue of cultural translation and how it presents a paradox to ethnomusicologists — or perhaps more broadly, to those of us who mediate musical representations in myriad ways (including via links and mp3s):

Should we understand our acts of translation as encounter? Or as appropriation? Encounter, even in its colonialist history, was meant to close the gap between self and other, clearly with power skewed toward the self. Appropriation, in contrast, often led to the eventual elimination of the gap, once the other was stripped of her identity. Inescapably for ethnomusicologists, this paradox bears the weight of ethical and moral imperatives.

Such imperatives are all the more reason to take cultural translation very seriously and to search for the means and methods that respect both author and reader, both original performers and those who listen and perform at a distance.

Ruminating on this while downloading a slew of new mixes from across the musiconnoisseurosphere, I can’t help but think about certain “nu” movements on the old ‘osphere (and, simultaneously, its meatspace analogs, outlets, and sources) — movements which I find promising and yet which, especially given my own involvement, also cause me to pause in “inescapable” knee-jerk reflexivity.

These new directions in musical production, circulation, and representation have been described in various ways, some giving more pause than others. If you’ve DL’d and/or danced to “baile” funk, kuduro, kwaito, and various global hip-hop/reggae/techno offshoots in the last couple years, then you probably have some sense of what I’m referring to: in contrast to more purist spheres of consumption and circulation (say, within reggae or hip-hop or techno), which can maintain a stubborn separatism, new movements in (and of) post-colonial pop/dance music have tended to swirl together via various eclecticist, ecumenical, open-eared (and perhaps open-minded) middlemen (and women). This embrace of “other musics” is not entirely unlike that in the “world music” circuit/market more generally, except that somewhat different notions of authenticity appear to animate the activity in these distinct, if overlapping spheres.

In what we might call “trad” “world music” discourse (e.g., deriving largely from the marketing attempts of the 80s and 90s) — the language and images and ideas mediating the explorations of Paul Simon, David Byrne, and Ry Cooder, as well as such record labels as Rough Guide and Putumayo — authenticity is often conferred onto the traditional, the pristine, the timeless, the exotic, that which has been untainted by capitalism, by Western cultural imperialism more generally, etc. Whereas the recent movements on the music blogosphere that I am thinking of tend to do the opposite: never mind these false ideas about purity, they seem to say, we want our global crunk, we want hybrids and fusions, we want mirror-mirror reflections and refractions of New World and Old World, North and South, East and West, we want music concerned with the future as much as (or more than) the past, we want drum machines and synthesizers and samples, for the local is always (trans)local and the global is (always already) here.

Of course, both “world music” discourses I am discussing here remain tethered to certain notions of (foreign, if familiar) rhythm, especially those figures that light up the “African”/”American” regions of our imaginations. But let’s leave that aside for a moment. (If, however, one is looking for an interesting perspective on this issue, see, e.g., Deborah Pacini-Hernandez’s “A View from the South: Spanish-Caribbean Perspectives on World Beat” [pdf].) Moreover, we might go further and note the preference among devotees of the new “world music” for the low-fi and DIY rather than the slick and commercial — a form of authenticity that dovetails with even as it departs from previous ideas about what, say, an African musician could or could not do in the studio in order to remain sufficiently “African” for local and foreign consumers alike. The question of “production values” and access to, say, Scott Storchian tech remains a vexed vortex for determining authenticity. (And, just for the record, as I’ve said before, there is no there there when we’re talking about the a-word.)

With regard to naming this new world music, one might simply gloss the constellation of genres as “urban dance music” or “global urban dance music” or some such neutral descriptor (as I and some ethnoid colleagues have done in framing our panel proposal for SEM 2007). Some have attempted to give it flashier names, hearing something of a global “ghetto” archipelago. (The number and spatial dispersion of myspace musicians identifying as “ghettotech,” for instance, is quite striking — and they’re not all tongue-in-cheek, or at least in the same way [same cheek?].) Still others nod to nu-metal, nu-rave, etc., to proclaim (or claim) a contemporary “nu world” movement. A brief, imagistic quotation from MIA describing her upcoming album for the Guardian would seem to point at, if not to shape, such a position: ‘Shapes, colours, Africa, street, power, bitch, nu world, brave.’ That last word, of course, despite perhaps a nod to Aldous Huxley, prompts us to wonder (or perhaps simply accept?) how much courage is involved in marketing the “nu world” to the New World (i.e., US consumers).

As the Bohlman quotations with which I began suggest, there is a fine line between encounter and appropriation, between, if you will, the half decent and the mad decent. As such, I’m deeply interested, being a middleman of sorts myself (for better or worse), in the ways we might understand the ethics of blogging about, mixing, zsharing, and otherwise mediating new world music (or whatever u wanna call it). Might we think about such activities as translations? If so, what is gained and what is lost?

Thinking about this should not necessarily give so much pause, however, that we stop uploading and downloading and DJing and dancing, and so toward that end, allow me to recommend some good outlets along the lines I’ve been tracing out above. There are the usual suspects of course — such globe-trotting champions of “other music” (and, yes, [always also] “self music”) as /Rupture and Maga Bo and Benn Loxo and their ilk — as well as these dudes, sin duda. Ghislain Poirier’s myspace page, for instance, currently describes his own distinctive, voracious, low-end theory as “Cosmopolitan ninja bass & chunky digital dancehall”! (I like that.) But let’s take this opportunity to note some other, perhaps lesser known, but quite chunky cosmopolitan ninjas in their own right —

Montreal’s Masalacists, for example, have been producing a stunningly consistent and stimulating set of mixes and podcasts and parties around the idea of global dance music, including some deeply detailed posts filled with outgoing links for more info & more music. Sometimes it seems — and this is where we get into the murky waters of translation — as if they give shape not simply to Montreal’s imagination of the world, but Montreal’s imagination of itself, the sound of Quebec undergoing the kind of demographic and cultural changes that have reshaped so many metropoles in the post- and neo-colonial era.

Similarly, London’s DJ Vamanos, who recently cooked up a guest mix for Masala and who kindly welcomed me to London by taking me to an excellent documentary on Cuban hip-hop at the ICA, seems to express in his posts, shares, and mixes that London is (eagerly) coming to polyglot terms with its imperial legacies and contemporary diversity and, moreover, that Britishness might accommodate itself to less provincial notions of self and home.

Of course, there are other ways to read and hear these things too.

When I first saw the name “Vamanos” — a misspelling of Spanish’s first person plural imperative, “vamonos” (i.e., “let’s go”) — I have to confess that I winced a little. For all the efforts at understanding a foreign cultural context, the name seemed to bespeak a certain ignorance, or perhaps the sort of irreverence through which certain idiot-savvy bloggaz attempt to mask their more cynical efforts. I have since come to appreciate it, however, as explicitly marking an inherent distance. It reminds me of similar (mis)spellings on the proto-reggaeton mixtapes of DJ Playero, for example, which might title one side “non stop reegae” and another side “raagga mix to mix” — 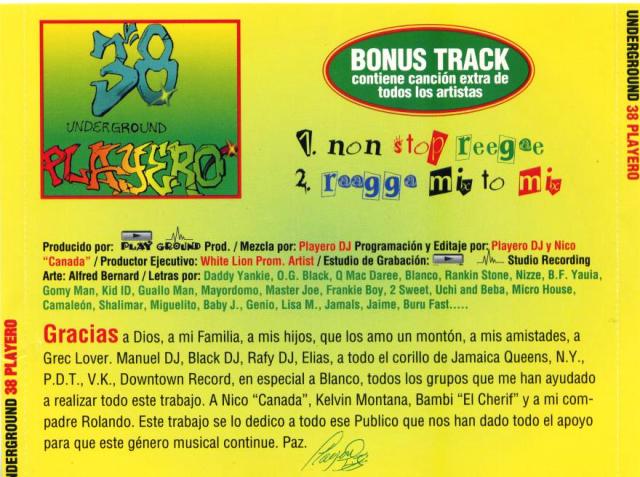 — whether ignorant or irreverent, the names make the same point that Playero’s dembow / melaza mixtapes make: they gesture directly and unmistakably to dancehall reggae while noting, quite obviously, that there is an act of translation underway. New contexts demand new texts.

And then, of course, there’s the slightly awkward URL for Señor Vamanos’s site: ghettobassquake, tapping into the “ghettocentric” discourses I noted above. As much as I appreciate the class and race politics of identifying with and championing the music of the poor, glorification of the ghetto is a vvvv tricky thing. These days I can’t get beyond this scene in my attempts at hermeneutical understanding of the complexities and contradictions swirling around such a project (even if one thinks it through a little more than John Brown).

Obviously, this is murky territory. Let me conclude, then, by pointing to one more interesting, and aptly named, node in the network: the Netherlands’ Murk, who recently cast his 3rd pod (or something like that) in a series that has explored — not unlike some of Dr.Auratheft‘s work — a kind of EU-era, post-911 (anti?)orientalism. “Ranging from dub to hiphop, dancehall, breakcore and tekno,” as Murk describes it, Jihadcore

Let me say first that I dig the mix, as well as the first two in the series. I especially like how Murk lets us hear how those utterly occidental genres (if we’re gonna think in Huntingtonian terms), reggae and hip-hop, serve as global filters for the nu-oriental. At the same time, there’s something weird (once again) about the mixture of serious engagement on Murk’s part (which is no doubt required to beef up them bellydance beats) and what seems like flippancy. What makes the CD-Rs in question “mysteriously labelled”? Is it because they’re in Arabic? Just wondering. I wouldn’t know how to tell from Murk’s text whether they were actually somehow substantively mys/mis-labeled or whether Murk is mucking around (critically?) with the notion of ignorance and the sometimes seemingly impassable distance of foreign language and culture. Maybe that’s how he wants it, suggestive like the music. Which is fine. But how about some pictures of said CD-Rs, how about the story of how they passed into one’s hands, how about attempting to tell us a little more about the poetics informing the mix?

I’m not asking that all of us in our various guises and roles and such simply become ethnomusicologists. (Far from it — though that’s the subject of another post.) But I’d like to see more of us consider the kinds of questions Phil Bohlman so trenchantly puts to us —

Should we understand our acts of translation as encounter? Or as appropriation?