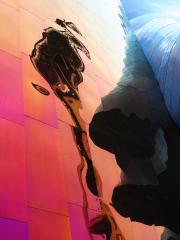 Off to Seattle tomorrow to participate in this. I’ll be following what I’ve been calling the “Zunguzung Meme” from Kingston to Brooklyn to San Juan and back (w/ several stops along the way).

That ol’ Yellowman melody sure seeps into some interesting (and often seminal) performances, telling the intertwined stories of hip-hop and reggae (and reggaeton [and religious rock?]) in an intensely audible fashion. I won’t be able to touch on all the occurrences I’ve catalogued to date, e.g. —

— but I’m gonna do my best to gesture to the breadth and depth of all these musical migrations, and to think about what various instantiations might tell us about the way such a traveling tune informs meaning-making processes and cultural-political projects, from conscious invocations to subconscious rehearsals (esp as King Yellow’s catchy contour disappears into hip-hop lexicon).

One way of many to tell the story, this mini-mega-mix connects lots of sonic dots:

wayne&wax, “Zunguzung Mix”
[audio:http://wayneandwax.com/wp/audio/zunguzung_mix.mp3]
(disclaimer: the tracks are of varying quality, as sometimes all I’ve got to work with is crappy vinyl or crappy compression, but you get the gist all the same; thanks to the kind collectors & selectors out there who helped me source some of these)

Sometimes cultural politics bleeds directly into, er, political politics, or politics qua politics, or electoral / “party” politics. E.g., watch how Cutty Ranks meks the meme big up Michael Manley & move the crowd at a mid-80s PNP rally. In such a socially and musically compelling context, wouldn’t you “put up your hand”?

Nuff to say. 20 minutes to say it. 6 million ways. Guess I’ll have to choose one.

15 thoughts on “Seeplist in Seattle”