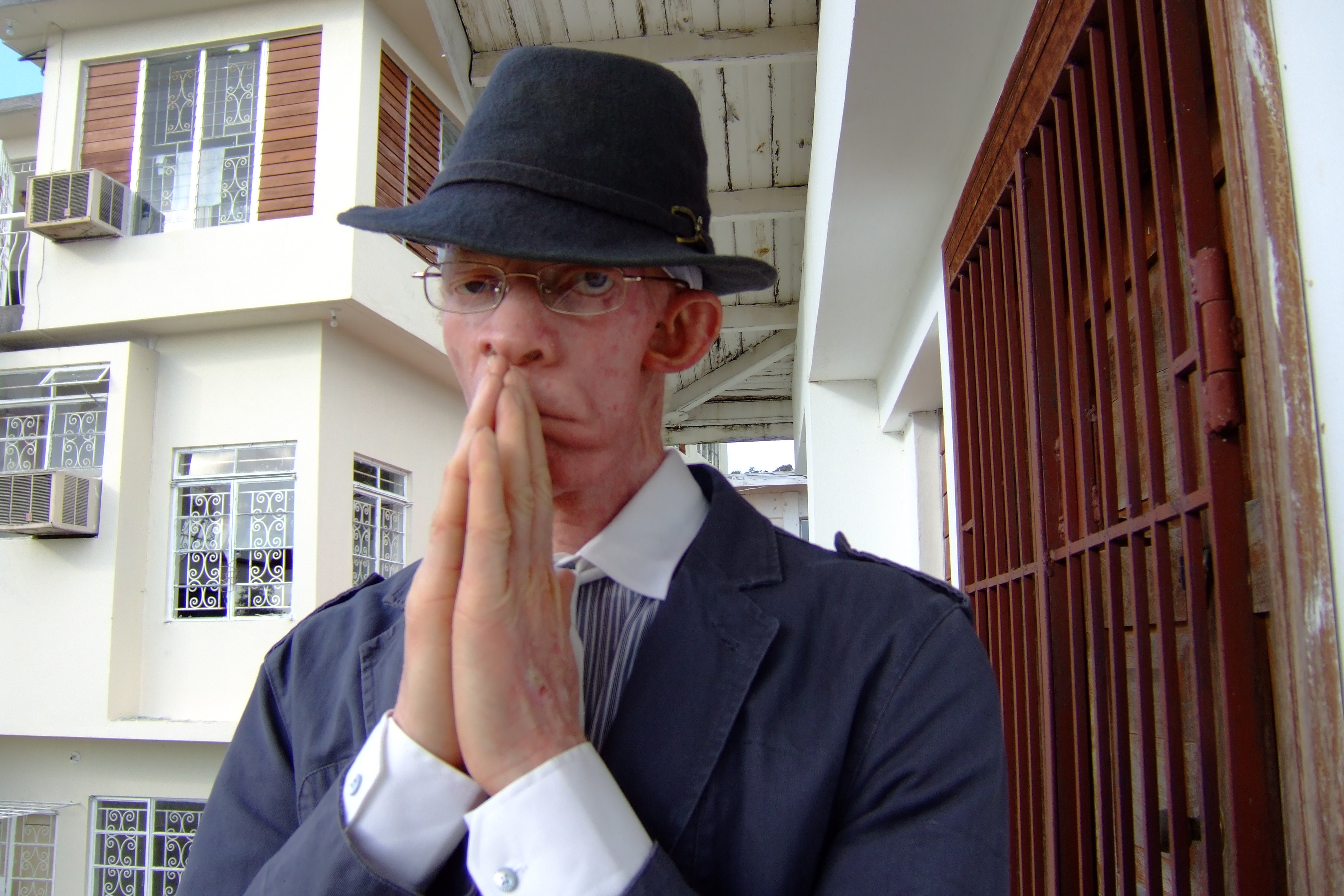 Is it possible that Zunguzung itself is an adaptation of someone else’s work?

It’s something I’d been wondering myself, of course — for about as long as I’d been noting the melody’s long legs, really. In my reply I said,

I’d love to ask him about it sometime.

Well, I’m happy to report that someone has.

That someone is Brent Hagerman, a PhD student in religion and culture writing a dissertation about Yellowman which, as he put it via email, “reads” his slackness “in terms of his Rastafarian faith.”

Here’s what Brent had to say about “[Zungu]Zung”:

I asked him once about Zung and he told me that he got the melody/phrasing from a Michael Manley political rally — similar to your Cutty Ranks clip, I assume, except it must have been earlier.

If you think that’s a revelation, you’ve got to hear the story for yourself. Many thanks to Brent for sharing it with me and allowing me to share it with you (and thx much to King Yellow too, of course!):
[audio:http://wayneandwax.com/wp/audio/Zung-interview-Feb-12-08.mp3]

Allow me to transcribe the conversation, with some cuts for clarity sake:

B: I thought you wrote that melody?

Y: No, the melody come from a political song.

B: A song that Manley used?

Y: Some guy used to go around with Manley and mic and say, “you shouldn’t trouble Mr. Manley, boy.”

B: That was never recorded, though?

Y: No, that never recorded. I take my style, and record it. I use the melody.

B: And did he use the term zunguzung as well?

Y: No, no. He don’t use the term. I only use the melody. … “Jump for happiness and jump for joy, you no fi call Yellowman no boy.” … So that get ban off the radio. … The reason why they ban it in that time, it was the Labourite government was in power. …

B: Because you borrowed this [melody]? You were making fun of the melody?

Y: No, I’m taking it to an entertainment level. … It became #1, you know? For several months.

B: Without being played on the radio.

B: And zaza has no meaning, right?

Y: No, it just a slang, like I would say zunguzunguzeng. It can mean anything, you know.

B: What was that guy’s name, do you know?

Y: No. You know like how Obama carry around Oprah? Fi get crowd, y’know? So they just carry a entertainer. …

So much for Swahili theories.

For students of Jamaican democracy, the timing for such controversy might seem a little odd given that Yellowman’s song was released in 1982, but the JLP had been in power from 1980 and the 1983 election was boycotted by the PNP. No doubt there was still a lot of fraught politicking a gwaan at that time. I’d love to know more about how it seeped into Kingston’s soundscape.

It’s interesting to hear (and see!) how the melody remained a staple of PNP rallies into the mid-late 80s, as seen in the Cutty Ranks clip from a 1986 PNP rally. Browsing 80s dancehall videos on YouTube, I discovered a couple other clips that show the “zunguzung” melody doing a particular kind of political work (i.e., rallying people around the PNP). Indeed, invocations of the tune provoke some of the biggest responses from the crowd.

Take the following clip, for instance, which I think is from the same 1986 PNP rally as the Cutty Ranks excerpt, held at Skateland by Stereo Mars sound. After a lot of pro-Manley chatting, you hear the tune at the very end of video (“hold up your hand if you love the power”). Note the immediate call for pull-up!

There are a couple more examples in the following clip from the same rally (at 0:16 & 3:34), affirming again how common a reference (and rally-cry) it was. Selassie gets nuff shoutouts too, though. As do Spanglers and Junglists (“all spanglers hold tight, all junglists hold tight”) —

And, one year earlier, we behold a similar use at another PNP rally held by Stereo Mars at Skateland, this time featuring Tenor Saw, Burro Banton, Super Cat, and others. See Likkle John at the 5:00 mark and then at 5:40, and once again note the crowd response! Notice too, however, that for all the potential “political” connotations of the tune, Super Cat goes on to condemn politicians’ role in the island’s gun violence problems (even, ironically, as Joe Lick shot, er, “licks shots” in support) —

Despite all this activity, the zunguzung melody was so rapidly adopted by dancehall DJs — turning up in a flurry of recordings/performances from 83-86, and a little more sporadically thereafter — and often in songs that have nothing to do with politics, that I wonder about the degree to which the tune was heard as “political.” By whom? In what contexts? I’d love to know a little more about the instances in which Yellowman received any kind of pushback for using the tune. What does he mean that it was banned? (And yet was “#1”?)

Before this revelation, I had simply assumed that Cutty Ranks was making use of a well-worn riff, leveraging a powerful bit of musical memory for political ends. That may still be what is happening in his case. But I’m not sure whether the opposite is true, beyond Yellowman’s initial use. Did the melody also (just as often/powerfully?) mobilize political sentiment in the service of entertainment? Were artists like Sister Nancy, Toyan, and others who invoked the melody around that time always acutely aware of its political connotations? Or did Yellowman’s hit serve to “liberate” the tune from its partisan moorings, at least to some extent / for some listeners?

One relatively early example which seems to suggest an unmoored melody comes from a 1983 Gemini session in Jamaica, where Johnny Ringo casually weaves the tune into the beginning of his talkover spiel —

Another good example of the melody’s more free-floating character comes from Yellowman himself. In the following video, from a 1984 Volcano session, he uses the melody not to sing “Zunguzungunguzunguzeng” but to propel another routine, imploring the crowd (or a particular gyal?) to “boogie for me.” (Note: this video is a slightly odd assemblage; you’ll have to FF>> to around 26:10, when Yellowman grabs the mic; 10 seconds later he breaks out the familiar contour.)

Any others out there? Do tell/point/link. (One of these days I’ll make a montage.)

One final note, per recent discussions here about musical “borrowing” and ownership: b/c Yellowman plucked the zunguzung melody out of the air, as he did so much material — as we all do, don’t? — he doesn’t much mind if others take those same ideas and do something new with them. At least that’s what Brent surmises —

As you probably know he won the Tasty Patty competition in 1979 with an answer to Lone Ranger’s “Barnabus Collins” and often jumped on whatever thematic/lyrical/musical bandwagon was in fashion at the time, whether it be sleng teng, punanny riddim or whatever. So I really don’t think he minds if another deejay “borrows” something from him. The industry seems to thrive off that give and take, though Yellowman, like most artists, recognizes the need to receive credit for his inventions, even if it is just by insisting that he is the king of dancehall and the originator of several fashions/styles.

But Brent’s gonna ask him directly about this issue, to be sure.

If you want to follow along, or even lend a hand, to Brent’s research project. Check out zunguzung.com, an online database devoted to Yellowman’s lyrics and discography. As he puts it, “I haven’t got a lot there yet but it is starting to take shape.” As he also puts it, much to my delight — and quite in line with the spirit of the zunguzung meme — “I was inspired by your work when I chose the domain name.”