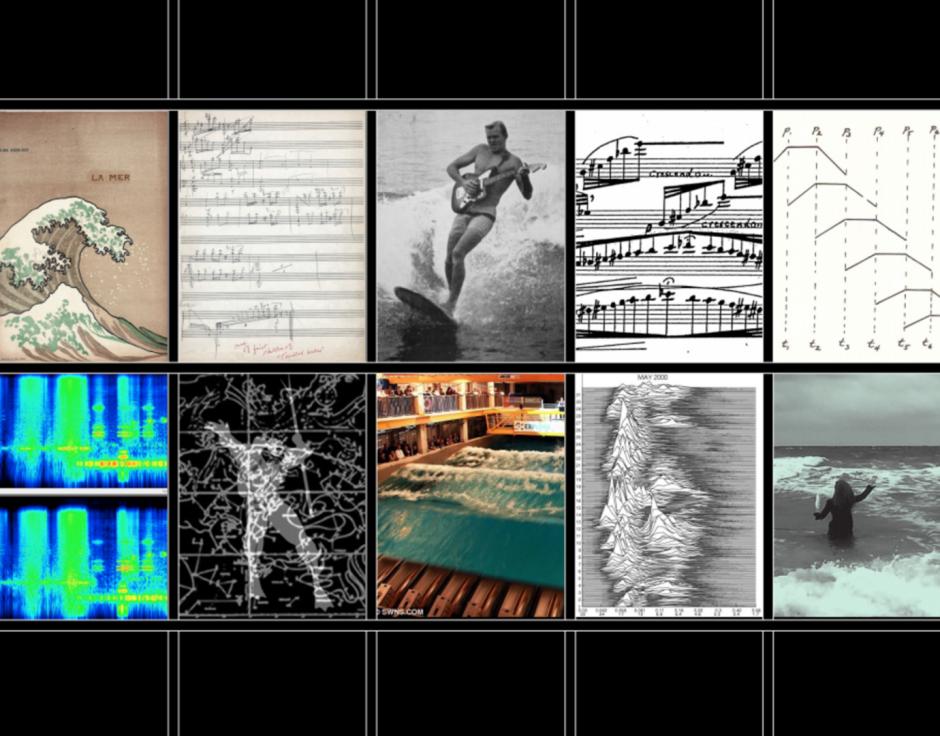 I’m happy to announce that MIT’s Stefan Helmreich and I have been collaborating on a mega-mix devoted to music that evokes or otherwise represents ocean waves. Building on Stefan’s anthropological work with ocean scientists and my ideas about telling musical stories musically, this mix carefully stitches together 70 pieces in a 3 movement, 44 minute montage. The pieces were composed between 1830-2018 and range across a wide number of genres and approaches — classical, romantic, modernist, minimalist, electronic and experimental, not to mention surf rock, reggae, bossa nova, jazz, and techno.

We’re very pleased to have the mix published via The Wire as a Wire Mix, and I’m grateful to Stefan for putting together a video — see below — which tracks and traces the appearances and layering of each piece in the mix (including full credits) as well as for taking the lead on the brief, evocative essay that accompanies the video (reprinted below, with tracklist). It’s been a wonderful collaboration, over a year in the making — and, no doubt, the most intricate mega-mix I’ve ever worked on — and we’re thrilled to share it with the world and to see what sort of waves, in turn, this mix may make.

Thanks, always, for listening along. Here’s an MP3 (100mb, 44min) if you’d prefer to listen “offline,” whatever that means these days.

WAVE COUNT is a montage, in serial and parallel, of mostly instrumental musical pieces meant by their composers to evoke or represent the sense and sound of ocean waves. Selections range from the years 1830 to 2018 and include classical, modernist, electronic, and experimental compositions, with pieces drawn primarily, though not exclusively, from traditions in European art music, American avant-garde composition, Afrodiasporic musics, and Japanese experimental work. The sequence rolls out common and uncommon wave-inspired phrases, turns, and arrangements — cataloging and connecting recurring formal musical motifs (or “topics”) as well as the more acoustic, sonic, timbral, and onomatopoetic qualities that have come to texture compositional representations of waves.[1]

The montage charts shifts across three loose epochal moments. Movement 1: Species of the Sublime, begins with Romantic composers’ attempts formally and texturally to represent the timbre and sublimely relentless arrival of ocean waves (and see Kieffer 2015), spooling out instances that suggest storms, martial enterprise, dreams of maritime glory, and fears of drowning, outlining the multiple meanings of the sea as a space of reverie, fantasy, memory, violence. Movement 2: Electricity and Experiment, charts more abstracted mid-to-late 20th century electronic-music emphases on the periodic, spectral, or mathematical quality of ocean waves, tracking compositions that treat waves as abstractions that might be lifted out of the water and given a parallel life in, say, synthesizer reproductions.[2] Movement 3: Thalassocene, maps early 21st century trends to revisit and repurpose canonical wave motifs, but also registers how, with the rise of sound art and compositions based on empirical field recording and sonified data, waves have been pressed to get “back in the water.” In such compositions, listeners might almost be hearing the sound of waves with no human presence around to hear them — underscoring a concern with today’s ecological disasters and with a post-Anthropocene time to come, where waves wash over history and relic buoys send signals to no one.

Ocean waves — stormy, sublime, frightening, regular, rippling, underwater — manifest across the montage as untamed wildness, as meditative nature, as forces of foreboding, as abstract inspiration, and as harbingers of a world in the wake of death. At every moment, waves are represented or audited through conventions of listening; the splash, hiss, surge, and more are not mere facts of waves, but implicate shifting and varied cultural modes of hearing, experiencing, and thinking about the music, sound, and noise of waves.

by Stefan Helmreich and Wayne Marshall,
version of May 2019

Full discography with credits to performers and record labels at end.

1. Sometimes composers have mobilized musical icons: signs (and groups of signs) that they imagine to have some likeness to the way ocean waves sound or appear (think of arrangements of notes, chords, or rhythms — or of the timbre of specific instruments). At other moments, they have worked through indices: signs composers take to have a causal or existential relation to the waves they represent (think of field recordings of waves or of captures of frequency spectra of a crashing wave). At still other moments, composers have approached the matter through symbols: signs that stand for their object by convention (think of military march music to represent dynamics of disciplined, steady succession). Often enough, they have done all at once, rendering the distinction between those key semiotic terms — icon, index, and symbol — blurry, awash in overlaps and confusion. See Schweitzer 1911 on a “wave motive” (76) in Bach’s cantata, Siehe, ich will viel Fiscer aussenden (No 88). And see also Monelle 2000, which argues that “the commonest musical icons — portrayals of waves, clouds, storms, horses — are not at all ‘pure,’ but are dependent upon well-known conventions” (77), underscoring the porosity of musical icon, index, and symbol.

2. We are prompted to this recognition by the pathbreaking writings of electronic musician Tara Rodgers (2011), who has examined how sound waves have been given biographies — “lives” — in electronic composition.