Appended below is the “director’s cut” (or unabridged author’s version) of a book review I wrote almost a year ago, which will soon finally see the light of day in the Journal of Popular Music Studies. The book is Mark Katz’s Groove Music, and I say enough below that I needn’t say more here, but as you’ll see, my review is quite supportive. If you’re interested in the history of the DJ, or hip-hop, or just good music writing and scholarship, I highly recommend you check this one out.

ps — here are the proofs if you like PDFs, but do see below for the full monty! 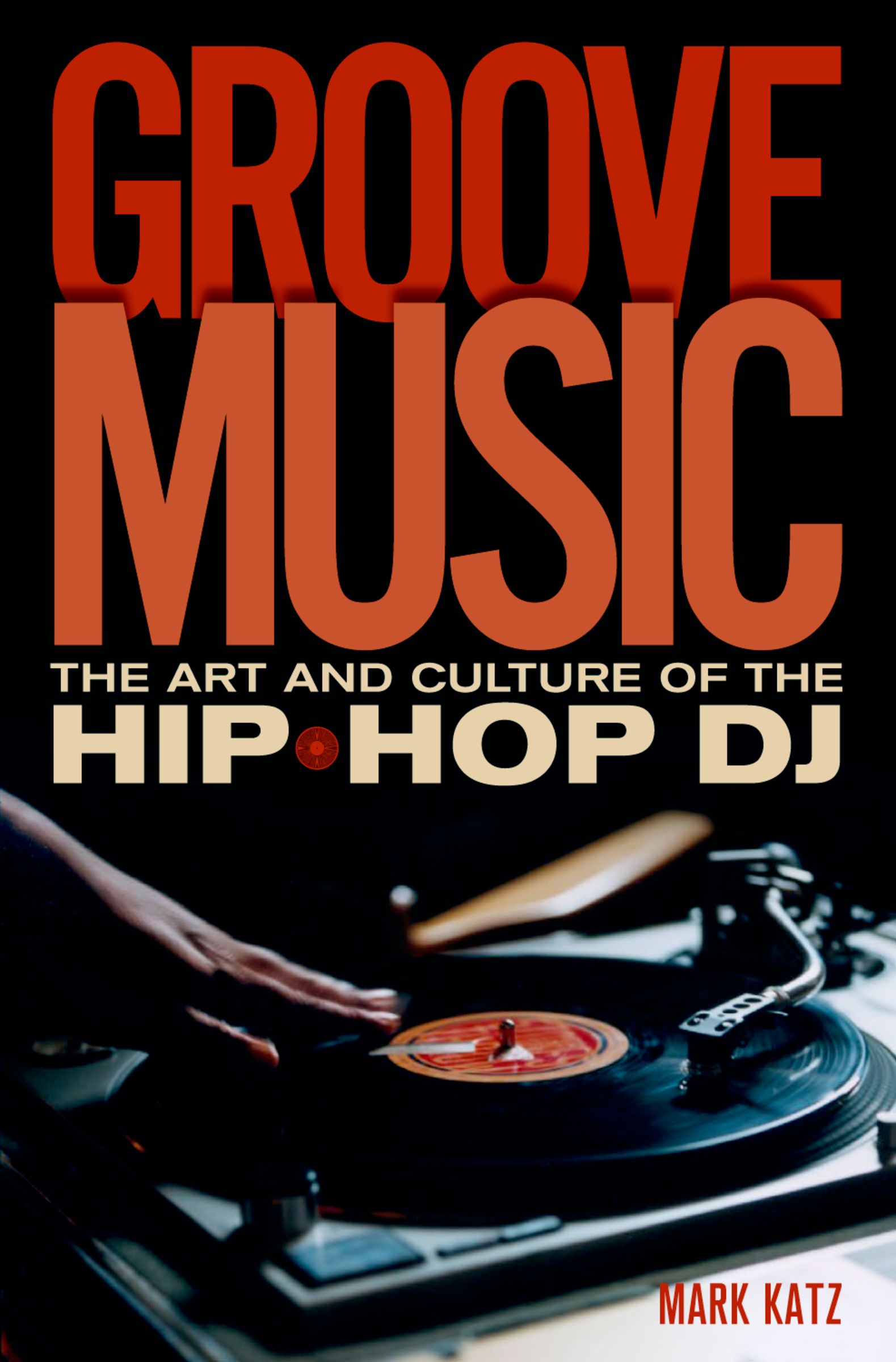 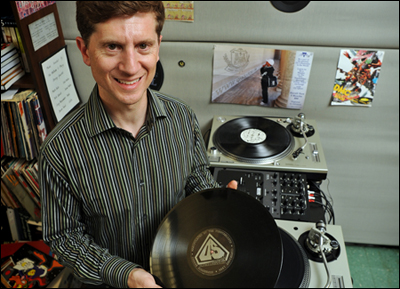 With Groove Music, Mark Katz has written a definitive history of the hip-hop DJ, filling a conspicuous void in the hip-hop literature while contributing more broadly to studies of music technologies—or perhaps better, to our understanding of how people make technologies musical. For Katz, the transformation of the turntable from a mere playback machine to a remarkably flexible and responsive control device—a musical instrument, no less—stands as “the signal contribution of the hip-hop DJ to modern musical culture” (5). This is quite a claim, but Katz represents, as hip-hop parlance would have it, offering historical, ethnographic, and analytical perspectives on hip-hop DJing, from roots to offshoots, with an unprecedented degree of thoroughness and attention to what matters to practitioners and audiences.

Like Joe Schloss’s authoritative works on beat-making and b-boying, Making Beats (2004) and Foundation (2009), which Groove Music should now sit alongside on shelves and syllabi, this is a lucid and deeply grounded work on a pillar of hip-hop practice and artistry informed by dozens of interviews, years of participant-observation, and deft close readings of live performances, canonical recordings, and oral histories. Groove Music fleshes out the growing (if still lagging) musicological literature on the DJ (Fikentscher 2000, Lawrence 2003, Butler 2006) by shifting focus from the relatively suave mixing of disco, house, and techno DJs to the more explicit performativity of hip-hop DJs, as embodied most audibly by the scratch—or zigga zigga as Katz sometimes glosses it.

To his credit, even while engaged in important acts of translation for his primary reading public (i.e., colleagues and students), Katz sets out to write the book that hip-hop DJs themselves would want to read. As such he commits himself to a chronological and narrative approach, and to a down-to-earth and occasionally playful prose style, peppering the text with such useful terms as “badassery” (168). The book is all the better for this approach, addressing the wider publics that these stories deserve to reach.

The rhythmically stuttered introduction of “DJ Premier in Deep Concentration” (1989), a hallmark production of the hip-hop DJ as hands-on artist—Here’s a little story that must be told—serves as an unremarked but undergirding imperative. While DJs such as Premier have been telling the story themselves and various works in the hip-hop literature address the subject in some detail (Chang 2005, Fricke & Ahearn 2002), no single text prior to Katz has sought to synthesize an overarching story of hip-hop DJing from its beginnings in 1973 to the present. Moreover, with the literature so focused on the foundational work of hip-hop’s hallowed trinity (Kool Herc, Afrika Bambaataa, Grandmaster Flash), little attention has been paid to the changing aesthetics and contexts of the hip-hop DJ in the decades since the form’s origins in the Bronx, especially how scratching has moved in and out of the spotlight in hip-hop and more broadly in American and global popular culture.

Throughout the text, Katz touches on numerous signposts, among them: the crucial feedback loop with dancers (14-16); influences from funk, reggae, and salsa (23-32); hip-hop’s ties to disco, however disputed (32-5); the urban context of the Bronx (35-42); the world of DJ-producers (121); the Bay Area’s Filipino DJ scene, dominant in the world of turntablism (145-7); the rise of mix-and-scratch academies (230) and virtual video games like DJ Hero (237). But it is Katz’s clear periodization of hip-hop DJ history, always grounded in ethnographic analysis of the political economy, material culture, and aesthetics of the enterprise, which emerges as the key contribution of the book.

Most crucially, in chapter 2, “Mix and Scratch,” Katz details the development of the turntable as a musical instrument, focusing on the mechanical and stylistic innovations by the likes of Grandmaster Flash and GrandWizzard Theodore (generally credited with inventing the rhythmic scratch). A centerpiece of Katz’s argument is his close reading of Flash’s seminal seven minute showcase, “The Adventures Grandmaster Flash on the Wheels of Steel” (1982), elaborating the techniques and effects, technologies and repertories involved in the performance. Grandmaster D.ST’s standout scratching on Herbie Hancock’s “Rockit” (1983) also serves as a key text in the popularization and reimagination of the turntable as instrument. Katz’s simple but profound point is that these DJs took a technology of sound reproduction and used it for “real-time manipulation” of sound (62). This story of transformation finally comes full circle toward the end of the book when Katz examines the rise of digital vinyl (e.g., the Serato or Traktor systems), which embodies the utter shift of the vinyl record from a storage medium to a control surface.

Other chapters divide up the history of the hip-hop DJ according to the strange and sometimes circuitous paths the tradition has taken. Chapter 3, “Out of the Bronx and into the Shadows,” addresses the question of how hip-hop, despite its beginnings as a DJ-driven phenomenon, would soon enough be synonymous with rap. According to Katz, the rise of the MC and concomitant decline of DJ, relegated to back-up band or, by the late 1980s, even replaced by DAT machines, actually served in its way to make room for new forms of hip-hop DJing. Despite the DJ’s recession during hip-hop’s commercial and cultural ascent, where other hip-hop chronicles tend to depart and leave DJs in the shadows, Katz remains stalwart in his focus, turning to the expansions of DJ practice in chapter 4, both in terms of scratch technique (and Philadelphia’s specific contribution: the “transformer”), as well as the art of beat-juggling. Katz carefully describes new techniques as they develop, putting them into aesthetic, functional, and socio-cultural context, noting the emergence of new contexts for DJ practice, particularly the rise of the competition circuit. Indeed, chapter 6 is entirely devoted to the forms, rituals, tools, and techniques of the DJ battle, judiciously examining points of aesthetic conflict and consensus.

Given Katz’s abiding concern with the instrumentalization of the turntable, the advent of turntablism in 1990s is an obvious watershed, and chapter 5 explores this practically autonomous and increasingly abstracted realm of hip-hop DJ practice. Katz explores the symbiosis between turntable, needle, and crossfader design, noting that while initially many of these features were ad-hoc innovations on the part of tinker-DJs and their “vernacular technological creativity,” by the mid-1990s manufacturers were taking notice and incorporating them into their products. Here, as elsewhere, we’re treated to some sharp material culture analysis: new mixers and crossfaders enabled innovative new techniques such as the “crab scratch” where technical limits had previously made them impossible.

In chapter 7, Katz turns to the new ubiquity and legitimacy that scratching enjoyed between 1996-2002, not in hip-hop itself, notably, but in “almost every corner of popular music” (182): pop, rock, jazz, electronic music, and even the classical world. The scratch comes to mean any manner of things in a wide variety of contexts: “With the mainstreaming of hip-hop, signifiers started to float freely” (180). This creates further room for experimentation, giving rise to the “cult favorites” the DJ albums made by the likes of DJ Shadow, Qbert, and Kid Koala, rich and remarkable works to which Katz devotes some overdue analysis.

The question of “Falling Barriers” in chapter 8 reads as a fitting coda, bringing the story of the turntable’s instrumentalization back to its beginnings in important if unexpected ways. Contrasting the rejection of CDJs with the embrace of “digital vinyl systems” allows Katz to make an insightful point about vinyl’s place in hip-hop aesthetics as “precious,” “authentic,” “elemental,” and “fundamental” (218). Vinyl’s tenacity as a control surface not only speaks to these values, grounded in decades-old practice, but to the ontology of the turntable as instrument: a seemingly sudden crossfade that makes total sense in retrospect.

Notably, rather than a CD insert (which would have been an enormous tangle of licensing permissions), Oxford University Press offers a useful companion website full of media referenced in the text. These may be mostly links to YouTube videos, leaving their stability in question, but it’s a rich resource all the same, especially if readers use it soon, before the inevitable link degradation.

Groove Music represents a strong monographic extension of Katz’s previous work in Capturing Sound (2004) and the recent anthology he co-edited with Tim Taylor and Tony Grajeda, Music, Sound, and Technology in America (2012). All of these works are animated by a concern with registering the plasticity of sound technologies, or how people find their own creative uses for such things. In the history of sound recording and reproduction, there may be no more spectacular example than the advent of performative hip-hop DJing, and Katz has given the tradition a fitting monument. The specter of legitimation may yet haunt the hip-hop literature, but efforts such as Groove Music help to push beyond such entrenchments precisely by taking the subject so seriously that no hint of novelty or condescension corrupts it.

3 thoughts on “Groovin’ on Groove Music”