What a weekend on the way!

First, this Friday, I’ll be honored & pleasured to drop some gems at the Good Life (downstairs to boot!) for an absurd iteration of Picó Picante, my favorite local dance party. (And apparently Boston’s too!) In addition to resident DJs, Pajaritos and Oxycontinental, I’ll be joining downstairs headliners Uhuru Afrika (hosts of a longstanding pan-Afro night that sets live master-drumming over dance music from across the continent); meantime, upstairs will be locked to the sounds of several of my fave DJs, all with local ties: False Witness, Blk.Adonis, Dev/null, and LA-transplant & master mind-fader, Kingdom. (I’ll be kicking myself for missing whomever’s playing upstairs opposite me.)

It’s gonna be bonkers, sin duda. After this summer’s well received reggaetony set, I’m gonna have to up the ante, especially with downstairs’ subs to exploit. Trust it’ll be another crunk genealogy of some sort. Bottom-line: there’s nothing like playing to a room full of smiling dancing people. Can’t wait!

Then, on Sunday Nov 18, I’ll be at the Queens Museum in conversation with Apache Indian and DJ Rekha– 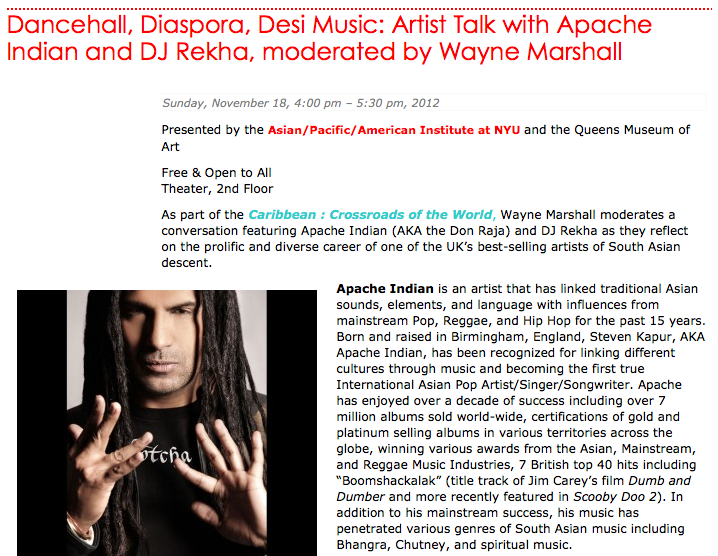 Felicitously — and aptly — the event is tied to an exhibition I’ve been wanting to check out, Caribbean: Crossroads of the World. What better angle to take on an English-born Punjabi bloke who raps over dancehall rhythms in a convincing Jamaican lilt, chatting bout arranged marriages with good creolized girls who “talk the Indian with the patwa” while proposing fusions of ragga and bhangra that, alongside contemporary Bally Sagoo, sketch out the blueprint for the entire genre as it’s known today.

A pioneer crossover artist, in his heyday Apache Indian addressed massive public followings in the UK and India, while enjoying a rare bit of outsider success in reggae and rap networks. And you can hear why. No more indebted to his namesake, Super Cat (aka the Wild Apache), than, say, Sean Paul is (which is to say, deeply indebted), Apache Indian distinguishes himself with a mastery of form that exceeds imitation. Man sound real, as they say. Check the original Don Raja stylee —

His knowledge of & affection for Jamaican music clearly run deep; note the fidelity to classic 60s style in what may be his best known song (thanks to inclusion on a few film soundtracks) — and, yes, he clearly enjoys playing “the Indian” in a Jamaican context (and the reggae guy in an Indian one):

Of course, all of this is to say that he sounds about as British as anything (or anyone) else. And his recordings embodied as they emboldened a generation of Asian youth who grew up amidst England’s unruly and often Caribbean-accented multiculture, and who wanted to own all of that — and to make it their own thing (no matter how Jamaican it might sound). Directly or indirectly, Apache Indian’s performances always raise questions about race and nation, (cross- and intra-)cultural dynamics and traditions, mutable and fixed positions. And this is irrespective of whether he’s performing in full Jamaican regalia, some bhangramuffin ensemble, or Putumayo-pleasing homeland garb (b/w Rastafarian rhetoric)–

Lots to talk about, no doubt. The event is free and open to the public, so come on thru!