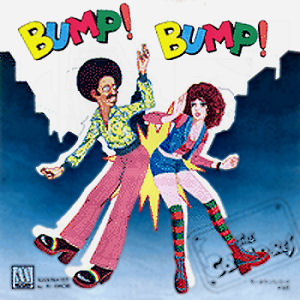 Yesterday Cluster Mag posted my second contribution to what we’re calling a “multimedia mash-up series.” (The first was my Lambada mega-mix.) As with my “Gasodoble” remix, this mashy montage sources related clips from YouTube — in this case drawing from Colombian (and a Dominican) choque vids and a variety of folk (mostly US-based) doing the bump — and collides them together (artfully, I hope) to pose some fun questions about symmetries, genealogies, and notable departures.

If you liked my lengthy post on choque from a couple months back, or if you’re a longtime devotee to the bump, I hope you’ll <3 "Bump con Choque.”

Here is the text from the Cluster Mag piece, which is no longer online (though also archived here):

It’s almost perfect in its simplicity: bump against your dance partner, once every beat or so, repeating as desired. In the 70s, they called it “the bump.” More recently, in Colombia, it goes by “el choque” (alt. “shoke” or “choke”) — the Spanish word not for “bump” but its more severe cousin, “crash.” Looking at the dances side-by-side or, if you will, transposed together as I’ve done in the video above, you get an immediate sense of resemblance, perhaps even genealogy.

But despite a few stray correctives on YouTube comment threads, I’ve yet to see any evidence linking the moves Colombian kids are doing with the disco fad from three decades prior. When I tried to get to the bottom of the bottom-bashing dance from Buenaventura, its obvious antecedents were reggaeton’s perreo and dancehall’s daggering — both serving as clear but muted points of departure for the choque’s nimble-hipped rhythmic thrust. Seems more plausible, despite that plenty kids in choque videos could have parents who remember “el bump,” that we’re talking instead about a case of convergent evolution, two kindred dances springing from the same age-old seed. I mean, it’s a pretty obvious move.

Indeed, the dance seems so universal that all manner of folk claim it for themselves, declaring the most popular choque video to be everything from East African to West Indian. [Alas, the video is no longer online, but see my post for some screenshots of comments.] And yet these spectacular collisions can divide as much as they conjoin, especially when conveying different modes of masculinity and sexuality. Superficial as it may seem, the choque has served as a transnational site of debate, which might be more than can be said for three decades of the bump.

And yet, while one might argue that the choque is an interestingly “equal opportunity” dance — especially given how strictly macho the perreo and daggering tend to be — any such leveling of the dirty-dance playing-field applies to the bump as well: butt to butt, side to side, hip to hip, it can be silly, deflective. Even the president can do it, and with a teenage girl no less! Most choque videos possess a nonchalant playfulness, showing the dance to be, among other things, a fun way to hang out and goof around with friends and family. As I think this mashup shows, the bump has long served that purpose too — even, or maybe especially, thirty years removed from actual dancefloor drama.