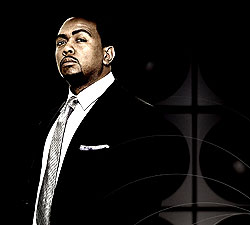 Not surprisingly, Timbaland is back in the news — and in the courts — again facing charges of outsourcing the orient unauthorized sampling. This time he’s being sued, for the second time, over the use of elements from the Egyptian composition “Khosara” (most famously recorded by Abdel-Halim Hafez back in the 50s) for Jay-Z’s “Big Pimpin,” a worldwide hit in 1999.

Longtime readers of this humble blogger might recall that I discussed this case (or, that is, an earlier case based on the same dispute) way back when over at the Riddim Method. Back then, I linked to an article in Al-Ahram which offered various perspectives on the situation and ultimately made the interesting argument that Egyptian music wasn’t getting its proper due because of Timbaland’s unacknowledged borrowings and — adding insult to injury — that some journalists were projecting the distinctive sounds of Egypt onto other exotic spots in their musical imagination, calling the production “a swaying, South-Seas flavoured groove that’s a happy musical marriage of Brooklyn and Bali,” say, or “Bollywood-wigged NOLA bounce stutter-stepping.” (Now them’s some music crit chops.) This sort of misled/misleading identification, however, is not so surprising given the way Timbaland passes off Colombians as Indians, among other others.

Well, sorta, except that the line on this one has been that Timbaland replayed rather than sampled the riff in question (which, in all fairness to Baligh Hamdi, the composer of “Khosara” [not the plaintiff, you will note], is an introductory, recurring, and central motif). At least, that’s clearly implied in the Al-Ahram article:

But the catch here is that since the song is re-recorded, permission may only need to be taken if a significant portion of the work, some eight bars or more, is used. Jay-Z only uses two bars, even though he repeats them throughout his whole song.

Now, I’m not sure where that criteria is coming from. 8 bars? That’s a lotta bars. Let’s not forget that James Newton sued the Beastie Boys for a 6 second / 3 note riff (even if, yeah, he lost that one). At any rate, the sentence above certainly advances the unconfirmed assertion that Timbaland (or some studio-hand) replayed the riff from “Khosara” rather than directly sampled it. (And that’s certainly how it sounded to me, given the crispness of the sounds in the “Big Pimpin” beat, especially when compared to the Hafez versions I found.)

This bit of investigative journalism, a few paragraphs later, is similarly revealing, but w/o telling anything about the truth:

The Weekly spoke by phone to a representative of an independent hip-hop record label in New York and asked what a copyright owner’s chances in Egypt were of getting credit or compensation for the use of Hamdi’s tune on Big Pimpin’. “I don’t think it’s sampled at all,” was their response. “I don’t think he’ll get anything unless he’s got real good proof. I think you’re barking up the wrong tree,” they added before abruptly hanging up.

Real good proof, huh? Well, as it happens, it has come to my attention that Timbaland (or whomever his would-be Scott Storch would-be) most certainly did NOT replay those two bars, and there’s some downright audible proof. Czar, a blogger at the all-Timbo-all-the-time group-blog, Thomas Crown Chronicles (which also discussed this case last week), offered up the following detective story after checking out my earlier account of the controversy —

While I was reading your post, I felt that I should let you know of one theory of why I think Tim, Jay-, and company got off the hook for “Big Pimipin.” While Abdel Halim Hafez’s version of “Khosara” is the most widely known, and would therfore lead many to believe that Timbaland replayed the opening bars of Khosara for “Big Pimpin.” However, I believe that Tim actually sampled a version of “Khosara” called “Khusara Khusara” by Hossam Ramzy. If you compare Hossam’s version and “Big Pimpin,” they’re identitcal (including the flute). Moreover, Hossam Ramzy’s version is found on a CD called “The Best of Bellydance from Morocco, Egypt, Lebanon, Turkey” that interestingly features a song called “Enta Omri (I)” that Timbaland sampled in 2001 for Petey Pablo’s song “Raise Up” (go to 5:25). To have these two songs back to back on the same album seems more than just a coincidence.

Pretty good proof that. What’s more, the two sample sources don’t just go “back to back” on the CD: they’re tracks #1 and 2 (and they’re both by Ramzy), which, frankly, leads me to be less sympathetic to Timbaland than I usually am inclined to be to a sample-based producer.

In case you’d care to compare (note: the Timbaland version pitches the sample down a semitone):

[Update: the divshare version is no longer there; here’s another copy]
[Update again: the imeem link disappeared after MySpace acquired/obliterated the site; here’s an instantiation at YouTube — we’ll see how long that stays up!]

Now, this may or may not affect Tim’s current court proceedings, but it certainly could create future legal woes for the superproducer (= big target). And so, with this bit of unmasking, I realize I may appear to be departing from a previous position I’ve held w/r/t divulging sample sources. The question of permissible borrowing vs. unlawful appropriation, however — which, we should note, only exists in a world of commerce — is simply too complicated and too fraught with implications to take such a hard line (or easy stance). Each case needs to be approached in its particulars, weighed on its own. I’ve done some musicological consulting on copyright infringement cases (which I will happily share with you in gory specifics at some point), and I’ve turned down more than one request to take on other jobs because I didn’t agree with the plaintiff’s claim. I’m not a mercenary. I refuse to assist in the making of specious arguments, especially those that cut against my own sense of what is ethical in the world of musical-cultural-creative practice, influence, and exchange.

But, to return to the particulars, if anyone’s got a case here, or deserves some profit sharing, it’s Ramzy, who, incidentally, has a whole load of music @ Calabash, including several albums of Pure Egyptian Percussion. This makes me think that maybe Mr.Ramzy would do well to court more of this sort of thing. Forget the litigation, get in touch and make some beats. Invite remixes, raise your profile among (and make deals with) bigtime beatsmiths like Timbo (and lil folks too). Make licensing easy. Pimp the system. (Hell yeah.)

U know what, tho? If I were on the case, I’d make a mashup to make my point & it’d go a lil something like this —

[for the record, I’ve moved them both toward each other — in terms of warping pitch, etc. — rather than “disciplining” one track to fit the other; & I think it’s pretty clear — and noteworthy, too — that the Timbaland version adds a lot to the overall mix here: the beats and bass and bleeps arranged around that flute loop are more than just a little window dressing; i also let the harmonic correspondence drift after a while, which i kinda like; call it a freehand mashup; refit it yerself if you like]

15 thoughts on “Gyp the System”