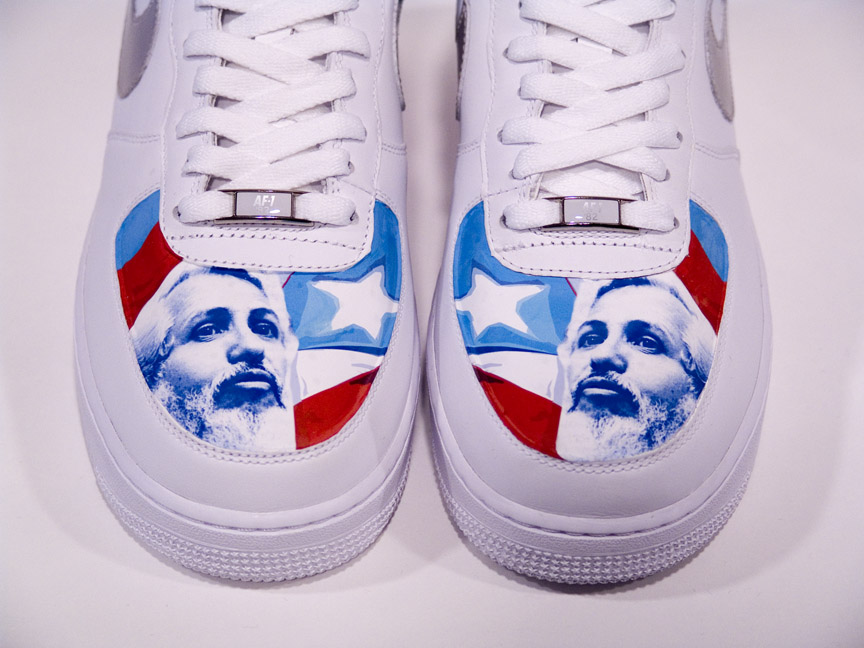 Pictured above is a shot of Filiberto Ojeda Uptowns / Machetero Air Force Ones by visual artist Miguel Luciano, as featured in a show opening this Sunday, April 15, at Bard College. I’ve been an admirer of Luciano’s arresting approach since Raquel Rivera (who brought this latest project to my attn) sent me a digital dossier of his work to consider for inclusion in Reading Reggaeton. I was quite struck by his Pure Plantainum series — “playful and painful” really says it — and I almost immediately felt that we should put Plátano Pride (see below) on the cover, as it suggests so many poignant readings itself. Critical and empathetic, cartoonish and complex, the image seems to shine a funhouse mirror back at reggaeton’s blinblineo — Here’s a description of the project —

Miguel Luciano transforms the image of the plantain or platano from a stereotype to an icon in his Pure Plantinum series. He explores this complex symbol of Caribbean culture, embedded with layered references to race and class, through associations with the exploitation of field laborers, and its pejorative use as slang for Puerto Rican and Dominican immigrants. An actual green plantain was cast in metal and plated with precious platinum, the giant-sized pendant hangs on a platinum chain and is displayed here as a precious object. It was also photographed in the window of King of Platinum, a store in Harlem, where it is presented as an emblematic token of respect. An object imbued with value in the context of today’s hyper-materialism.

About Luciano’s latest piece of vivid, critical art, Raquel has this to say:

For me, it hurts to look at Filiberto–icon of armed struggle for Puerto Rican independence assasinated in 2005 by the F.B.I.–emblazoned all over these sneakers. I find this piece to be an insightful and deeply disturbing commentary on our consumption-obsessed lives, particularly painful in the context of Puerto Rico’s colonial relationship to the United States.

And Miguel says this:

The Filiberto Ojeda Uptowns / Machetero Air Force Ones are a customized pair of Nike sneakers that pay tribute to the assassinated leader of the Macheteros, a clandestine group of Puerto Rican nationalists who’ve campaigned for independence in Puerto Rico since the 1970’s. Filiberto Ojeda was brutally assassinated by the F.B.I. on September 23, 2005 and has since been revered by many as the “Puerto Rican Che Guevara”. A pair of Nike sneakers become an unlikely vehicle of veneration for the fallen leader that both complicate and question how nationalism and resistance are embodied within today’s colonial consumerist society. Nevertheless, they engage alternative strategies towards reconstructing symbols of resistance from the objects of material desire, while questioning the commodification of Revolution. The Machetero Air Force Ones transform Nike’s Swoosh logo into a ready-made Machete symbol, as the mantra of Nike’s “goddess of victory” gives way to “hasta la victoria siempre”.

& Calle 13 says this (pues, not about the sneakers, but about the assassination of Ojeda):

& just to underscore the connection to (corporate) colonialism, I leave you with one more provocative, painful piece by Luciano (more here, here, and here; interviews here and here) — 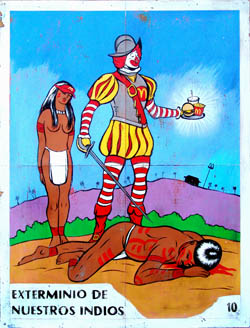 Have it your way? Just do it? This is why we hot?