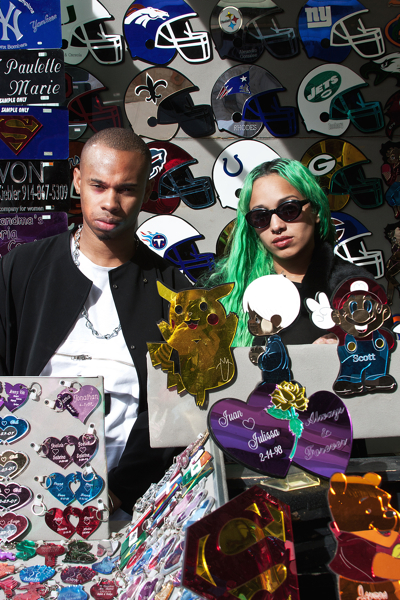 I’m thrilled to report that Venus’s partner-in-rave, $hayne (pic’d above), will be joining her on the trip. That means we’re gonna be treated to a tag-team/4-handed Ghe20 Goth1k performance the likes of which Greater Boston has not yet been party to. So get ready, and get to the club by 11, knamean.

(When I told Venus she wouldn’t be playing in the middle of the night, as she’s used to, she sounded happily surprised! Oh yeah, and just in case you’re on autopilot, this is happening at the Middlesex, not the Enormous Room [RIP].)

If you want a taste of what you might expect, look no further than the live mixtape (and, yes, it’s worth noting that it’s live — see next paragraph) they just cooked up for Opening Ceremony —

Ok, look a little further — you’ll hardly be disappointed — and do yourself a favor by starting with Venus’s appearance this past Monday on DJ /Rupture’s radio show, Mudd Up!. (Kudos to Sñr Clayton, btw, on that Wire cover!) I was emailing with Jace today, as it happens, and he offered some off-the-cuff thoughts on Venus’s DJing that really encapsulate what’s so special, and daring, about her approach —

seeing Venus reminded me of how so many DJs just surf the wave of ‘new jams’ and dont really fuck with the form itself. Whereas its so fresh and refreshing to experience Venus going for it, really working the CD-js in a percussive way, pulling and pushing sound around to create a thing in and of itself

Now don’t get me wrong, as those in the know will know, this won’t be the first time Ghe20 G0th1k graces a Cambridge club. Indeed, it was at Rizzla & co’s Nu Life party where I first met Venus, having been tasked with sourcing a couple CDJs for the occasion. Of course, these days, Venus is tweet-lobbying Pioneer to donate 20 pairs for a next wave of rad gal DJs. But big-up Rizzla for balance-beaming across the bleeding edge, no small achievement in this little town that, better or worse, I’ll always call home.

As Hatsune Miku’s team thinks of ways to translate the incredible phenomenon she represents for US audiences/co-producers, I could hardly think of a better partner for the virtual idol. Venus seems to think folks here are ready for the kind of plastic pop culture we can mold and form into our own shapes, and, as it happens, so does Ian Condry, the cultural anthropologist in MIT’s Comparative Media Studies program who is responsible for bringing Miku’s team to Cambridge next week (as part of the Cool Japan project). Ian, who wrote his first book about hip-hop in Japan, has recently completed a second book, this time about anime and collaborative creativity.

As he wrote in response to seeing a Hatsune Miku concert this past summer, Ian’s study of anime has led him “to see virtual characters as platforms of generative creativity in their own right.” Taking this a step further into the realm of invitational and reconfigurable culture, Hatsune Miku “demonstrates that there are likely to be many more kinds of platforms out there, waiting to created, built upon, shared, distributed, remixed and extended.”

Allow me to quote Ian’s blogpost for MIT’s Center for Civic Media in some length, especially since, among other things, it offers such a fine summary of what makes the Miku phenomenon so phenomenal–

Everyone was cheering, but at what? There was no one there, on stage, at the center of our attention, just a virtual avatar. And of what? Of whom? Of us.

Miku shows that pop culture, like politics, often appears premised on a leader on stage (or projected on a screen), but impact, and often creativity itself, whatever that means, emerges from broader, distributed collective actions. Miku hints at a world of untapped possibility, a model of crowd-sourced mobilization, and an instructive instance of a media platform that is part software technology (Vocaloid) part cultural idea (the character Miku).

Miku began as a voice on a music synthesizer software package called Vocaloid, created and sold by Yamaha starting in 2004. Vocaloid lets you make music by specifying instruments to play, like Garage Band, but with the added feature that you can write lyrics with melody as well. A separate company, Crypton Future Entertainment, released the Miku voice add-on in 2007, along with a cartoon image and biographical features (16 years old, height, weight, etc.).

Importantly, Crypton decided not to assert copyright control over the image, thus freeing up the character to have a life of her own, or rather, lives of our own. It’s as if we could all write songs for Lady Gaga, and she would perform them for us. Does it matter that Miku’s not real? How “real” is Lady Gaga anyway?

Fans responded by posting hundreds of thousands of music videos online, with a variety of shared costumes and images (e.g., a green onion / leek). In the years since, Miku’s star rose thanks to the energy of the fans amplified through uploading and commenting on the Japanese video-sharing site Nico Nico Dôga. So-called “Nicodo” is like YouTube except user comments scroll by as you watch a video, thus adding an additional layer of participatory viewing.

Nowadays, top MikuP (“producers”) sell their work online, and karaoke spots in Japan let you download and sing along with favorite Miku songs. Crypton has a site online for facilitating collaboration and licensing through a system, Piapro, which they say mimics Creative Commons. Fan work sells through other channels as well. In November 2010, I was one of 7000 attendees at a sold-out fan convention in Ikebukuro, Tokyo shopping from 500 fan groups who gathered to sell Vocaloid-related music, posters, DVDs, illustration books, video games, jewelry and more (see http://ketto.com/tvm/).

Given such fan excitement, it is small wonder that big business wanted in on the act. From 2009, Sega created video games for Miku under the Project Diva title, both for handheld devices and for arcades. Toyota is now using Miku for a series of ads as well, and they even showed a commercial prior to Miku’s Los Angeles debut (drawing some boos, but probably more good will). Ultimately, however, Miku is animated by the energy of fans, and that’s why watching Miku’s steps into commercialization will be interesting.

Miku reinforces some of the lessons for civic media that we’ve heard before: people need to feel a genuine openness to participate; sharing and dialogue are key to building a community; free culture is more generative than controlled-IP systems; cooptation and commercialization are always risks, especially as popularity increases.

But Miku offers a particular schema of distributed creativity, different than both Wikipedia and human celebrities. Miku lacks a back-story. She has no pre-defined personality. She doesn’t exist in a singular made-up fantasy world. This Wikicelebrity makes old-fashioned human celebs look like appliances, when the future is platforms.

Might this provide alternative ways of thinking about democracy and participation as well? If the social realities outside leaders themselves are what generate action and popularity, then questions of media should turn less on representational content, and more on the nature of platforms, how open they are, what forms of creativity they allow.

I’m getting a good feeling about this. Do help us make next Monday the first of many incredible meetings between Venus and Miku. Glowsticks optional. 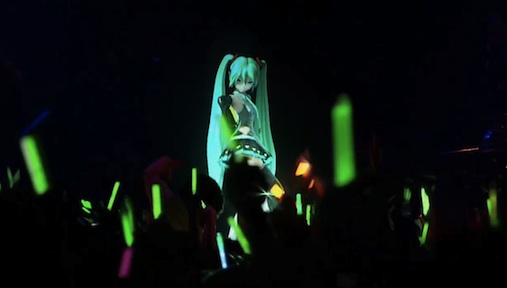