Since we’re back to the topic of the wide and contested world of reggaeton, it felt fortuitous to find in my inbox this morning a link to a new interview with Renato, Panamanian pioneer of reggae en español. With the effective prodding of Peter Szok, a history professor from Texas, Renato helps to further flesh out the picture of how reggae has been translated and transformed in Panama. Go read the whole thing, but allow me to highlight some illuminating excerpts below. 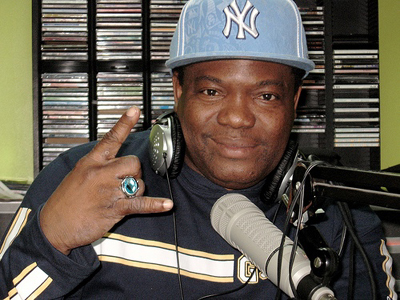 If you didn’t, you should know that Renato, of Bajan and Jamaican parentage, grew up in the Canal Zone alongside other English-speaking labor migrants from the Caribbean (and their children), and that he strongly identified with US pop culture before moving to Panama City as a teen, where he learned Spanish and participated in a number of crucial ways in the emergent reggae scene: MCing parties, recording songs for drivers of diablos rojos or mini-buses (which Renato describes as “like radio stations”), and, among other things, assisting the rise of Edgardo Franco, aka El General, who got his start as one of Renato’s 4 Estrellas.

Renato’s tale of making the transition from Canal Zone to Panama, from americano to panameño, deserves a little quotation at length:

What I knew was “Buenos días,” “Hola,” and “¿Cómo estás?” So I had a lot of problems. Since I came from the Canal Zone, the kids jumped on me and called me the americano. Once I took an apple to the teacher. That was something they taught us in the Zone, and they went after me for being a brown-nose. So you know, from those experiences, I had a lot of fights. They didn’t like me, because I came from the Canal Zone. The whole experience was a bit confusing. When we moved to Panama, my grandmother told me, “Son, I have to tell you something important. You’re Panamanian. We never told you before, because we thought that you knew.” I initially had a hard time believing. But she explained that we were Panamanians, but grew up American-style, because we lived in the Canal Zone. That’s why we knew the National Anthem of the United States and not the Panamanian song. And that was another problem. When I was at school, I had to sing the Panamanian anthem, and I didn’t know it. This also created a lot of problems. Because you’re Panamanian, and people think that you don’t love your country. But it’s not that. I grew up in a country that was in another country.

And here’s Renato describing how he and Wassanga, a local DJ, made their foray into production — for the buses/busdrivers, before music on buses was banned — using reggae instrumentals:

I’m learning now how to speak in Spanish and sing in Spanish, and so we start doing tapes with the reggae instrumental versions. The guys from the diablos rojos were a big deal for us. The bus drivers would tell us, “Hey I want you to do a song, saying that I’m the number one driver in this sector. I’m the best conductor. I’ve got the girls.” So I’d do something like, “Yeah, this is the number one conductor. Yeah, he’s got the number one structure. Girls like him, so get on the bus.” And we would do it in Spanish and put it on a tape, and he would play it on his bus. Remember that Panamanians had music on their buses. Panamanian buses were like radio stations. What you heard on the buses, was what was hitting. So after we started getting this popularity in Spanish, we began to write our own songs.

Here’s Renato on rap and the Canal Zone’s relationship to the US/NYC:

Rap started in Panama with “Rapper’s Delight.” It was a big hit, The Sugar Hill Gang was really popular. Then came Run-DMC. They brought in the breakdancing. I used to breakdance. Remember that I came from the Canal Zone, and so everything from the United States was my style. And so while I was in Panama and trying to do Panamanian stuff, it was still my style. I used to try to go every day to Balboa, because I was so accustomed to my style of living that I couldn’t stand being here in Panama. I used to go every day and spend all my money on bus fairs and taxis, just to be in Balboa, just to be in Pedro Miguel with my people, my friends. You know it was hard for me to leave my friends and to live in a place where I didn’t know anyone. Then everyone started to leave for New York. Almost everyone who grew up with me now lives in the States.

Finally, Renato gets to parsing the difference between Panamanian reggae (or plena / bultron) and Puerto Rican reggaeton:

But if you hear…the way we sing, then you’ll understand that it’s different from the Puerto Ricans. It’s a little more suave, and you can understand the Spanish more. Puerto Ricans like to invent a lot of words that most people don’t understand. In Panama, we have a different type of reggae. We have the most romantic reggae, because we are a romantic country. We don’t have so much gangster music. I can tell you how many gangster rappers we have. It’s like six or seven. But we have so many romantic singers, almost six or seven hundred singers who don’t sing about gangster stuff. Because we are not a violent country.

And when it comes to explaining reggae vis-a-vis “black identity,” Renato draws the lines pretty starkly, in blood red:

He paints in some broad strokes here, and perhaps fans a few flames, especially with such sweeping generalizations about national difference, but I appreciate the greater sense of context he gives us for hearing how reggae resonates in Panama.

To read more from Renato, download the full chat here, and see our book for two additional interviews.

1 thought on “A Country That Was In Another Country”